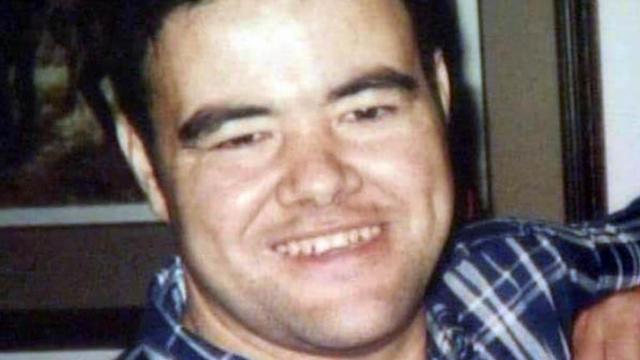 Hope Mills, N.C. — Nine years after a Hope Mills man disappeared, Cumberland County authorities have no leads, but a friend of the man's family continues to push the case.

Kent Jacobs was 42 when he disappeared on March 10, 2002, from a neighborhood about 2 miles from his mother's home. Relatives said he has a disability that left him with the mental capacity of a 9-year-old.

Family friend Dennis Mahon has erected a banner on the side of Camden Road that quotes a warrant investigators used to search nearby property last year. "There is probable cause to believe that a refrigerator containing the remains of Kent Jacobs is buried," the banner reads.

"I'm of the belief that he could be anywhere, but that is the No. 1 lead that needs to be taken care of right now," Mahon said Thursday.

The Cumberland County investigator heading up the case received a credible lead last year indicating that Jacobs' body might have been buried off Brooklyn Circle. Forensic archaeologists then used high-tech scanners to search for items buried on a wooded lot, but they found no sign of Jacobs or a refrigerator.

Debbie Tanna, a spokeswoman for the Cumberland County Sheriff's Office, said detectives cannot get another search warrant for the property. It's up to the landowner to allow investigators to continue searching the site, she said.

"This time's a little different because we have no evidence to show us that there is a probable cause for us to have to go back and dig again on the same property," Tanna said.

"They've not been really cooperative, and I can understand that. It was a lot to have people digging on your property," Tanna said.

Mahon has taken time off from work and said he plans to display his banner for a couple of months.

"This is, like, crazy. Let's get a warrant to get back on that property and dig up that refrigerator," he said. "If Kent is in there, case solved. If not, we can close that lead off."

Jacobs' disappearance is oldest unsolved missing persons case in Cumberland County. It has been treated as a homicide since about five months after he went missing.