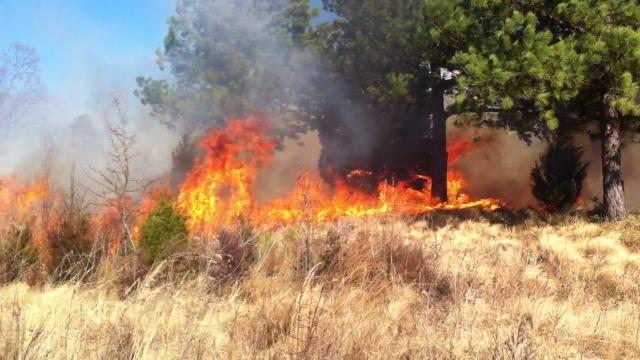 Raleigh, N.C. — A brush fire that started on the side of the road near Wakefield Plantation Golf Course in north Raleigh Saturday afternoon spread into a neighboring subdivision, shutting down roads as firefighters battled the blaze.

Windy weather and dry conditions caused the fire to quickly scorch 25 acres, from the gold course to the back side of the Wakefield Plantation subdivision. Some parts of the course were completely charred, but only three homes sustained minor, exterior damage, said Falls Fire Chief Chris Wilson.

Subdivision residents had difficulty accessing their homes, even after the fire was extinguished around 5 p.m. Crews remained on the scene to wet brush in the area to prevent any new flames.

"My brother-in-law called us and said there's a big fire in Rosemont," said homeowner Jennifer Le. "We just got back from the park and police won't let us in any way."

Wilson said crews from all over Wake County assisted in fighting the fire, and he praised their work in stopping the fire before it spread further into the neighborhood.

"It is difficult because naturally compared to something like a house fire, a house fire doesn't move. We know exactly where it is. Here you're combating the wind, the conditions. If you go to the wrong spot, it's gonna get too far ahead of you before you can regroup," he said.

He said the fire was a moving target.

"The majority of this is trying to get ahead of the wind direction... and as you can tell, it changes every few minutes," Wilson said.

Matthew Holden was visiting friends in Wakefield Plantation when fire broke out. He used a fire extinguisher to keep flames at bay.

"Sometimes the flames would jump from one foot to 7 or 8 feet just like that," he said.

The cause of the fire was still being investigated, but Wilson said it started very small on the side of Falls of Neuse Road and Garden Hill Drive.

One firefighter was transported to the hospital for treatment of dehydration. No other injuries were reported.