YMCA barber aims to be the best 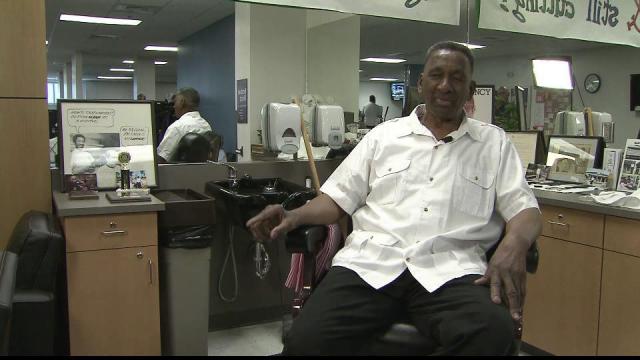 Raleigh, N.C. — A barber at a Raleigh YMCA says he's put his heart and soul into fulfilling a saying by slain civil rights leader Dr. Martin Luther King Jr.: Do your life's work better than anyone else.

Willie Wright has been behind the barber's chair at the YMCA on Hillsborough Street for 35 years.

He finds inspiration in a quotation from King: "Whatever your life's work is, do it well. A man should do his job so well that the living, the dead and the unborn could do it no better."

Straight out of barber college, Wright knew he had a gift. He remembers the praise an instructor gave him.

"He said, 'There have been many a barber that's come through this college, and I've seen many come and go. And might I say that Willie Wright is one of the top three barbers that have graduated from this barber college,' " he said.

Over the years, Wright has trimmed the hair of sports figures, politicians and other VIPs.

"I just made it up in my mind. I was going to be the best that there was to be," he said. "I love my work and let my work speak for me."

Staffers and members talk about his work all over the YMCA building. Many call Wright the "ambassador" of the Y.

Wright said that as the ambassador of the YMCA, his barber's chair is open to anyone.

"There are so many angles that carries," he said. "One of the major areas that carries is people. When people come in, I respect them, each and everyone regardless."

Wright said he has no plans to slow his pace. He's having too much fun.

"In age, going (in) the up direction, the better I feel, and the more energy I got to help other people," he said. "It's just a natural to me. It's just that simple."

WRAL-TV celebrates Black History Month with Living the Legacy. This month-long series spotlights the accomplishments of local individuals who are living the legacy of their ancestry and great African-American leaders.