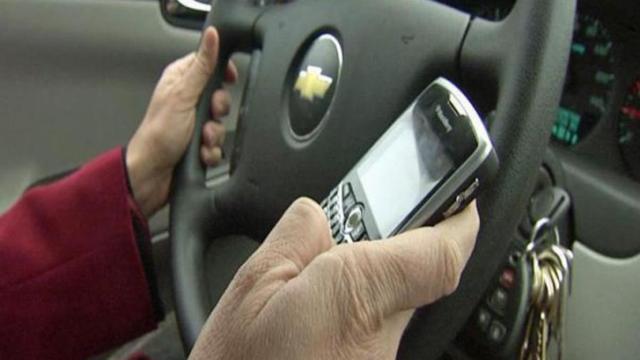 RALEIGH, N.C. — Starting Tuesday, North Carolina drivers who text behind the wheel will need to pull over to avoid fines.

The driving-while-texting ban, among 50-plus new state laws, builds upon a 2006 law already making it illegal for young drivers to use a cell phone while driving as a way to reduce distractions on the road.

According to AAA, a person who uses a cell phone while driving has the same deficient motor skills as someone with 0.08 blood-alcohol content level, which the state considers legally impaired.

“We feel it's more dangerous than drunken driving, and it's much more widespread, and kind of more accepted because people think, ‘Oh well everybody's doing it.’ But it really is more dangerous,” Jodi Woolard, a branch manager with AAA Vacations, said of texting while driving.

The law bars drivers from text messaging or sending e-mails with their cell phones while on a road or highway. But the law only applies to the driver while the vehicle is moving, not when it's stopped or parked.

"If you have a phone in your hand, and you are looking up a number, then that is fine. That is not considered texting. It's either texting e-mail or retrieving or sending texting," Sgt. Jeff Gordon, with the state Highway Patrol, explained.

Violators could face a $100 fine, plus $130 in court costs, and fines are higher for school bus drivers caught in the act. Police officers and other safety officials are exempt while in the performance of official duties.

"Our whole goal here is just to get people to focus on driving and not to be distracted when you're behind a vehicle," Gordon said.

Adults can continue to send or receive cell phone calls.

“What we're asking people to do, if you are going to text, stop your vehicle, pull off on the side of the road, receive the text, send the text, and then once you get done with that, then precede on your way,” Gordon said.

At least 18 other states have texting bans for all drivers, according to the Governors Highway Safety Association. The state Highway Patrol says too many young people are still ignoring the 2006 law. The patrol is holding safety events at high schools where teenagers travel in golf carts and try to avoid traffic cones while being told to send a text message.