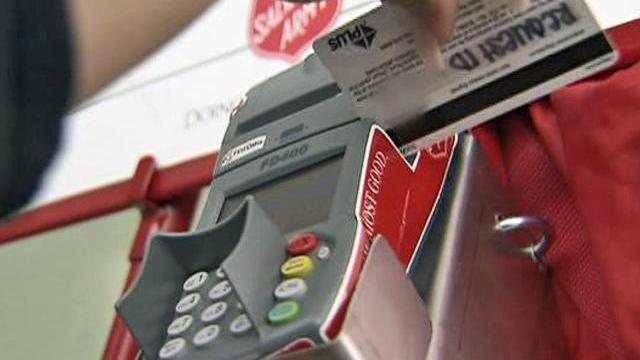 Raleigh, N.C. — A high-tech world and an economic downturn have spurred charities to create new ways for people to donate.

Kristynna Oliver was happy to pull out her credit card when she passed the Salvation Army's red kettle at Triangle Town Center. It's one of four in the Triangle equipped with a credit-card reader.

"It's definitely a way I can contribute, because I don't carry cash," said Oliver, adding that she liked the convenience of not having to rummage around in her purse for change.

North Carolina State University has adopted another high-tech strategy to raise money for a scholarship in honor of legendary women's basketball coach Kay Yow: Donors can send a text message, and the $5 donation is added to their phone bill.

Charities have been forced to adapt to get attention and money in a world that has changed the way it communicates, said Todd Cohen, with the Raleigh-based Philanthropy Journal.

He pointed out other aspects of the explosion of high-tech donation opportunities: Facebook has a "giving" section for charitable causes. When people buy from the Home Shopping Network's Web site, they are asked to contribute to the Susan B. Komen Foundation. Workers can donate through a payroll deduction.

"You need to try everything you can that works," Cohen said. "This is a way that people communicate today, and charities need to learn how to communicate that way as well."

Donors at the Salvation Army kettle said they believed the new high-tech options will increase giving.

"It's a wonderful new idea to do that," donor Birute Whisnant said. "Sometimes, you know you don't have the cash, and your heart is there to help, during the holiday season especially."