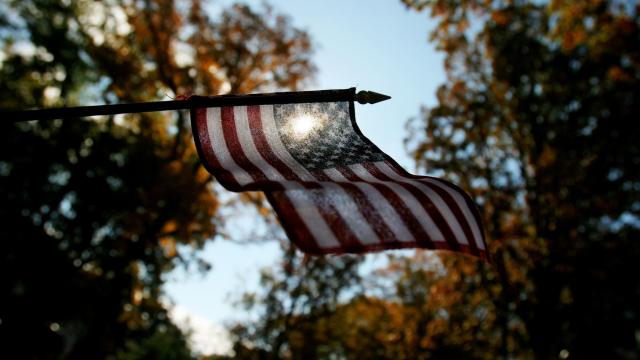 Raleigh, N.C. — North Carolina honored veterans Saturday with annual parades in Raleigh and Fayetteville and a ceremony at the State Capitol building.

This year's State Capitol ceremony was more poignant than usual. It included prayer for the 13 service members killed and more than two dozen injured in a shooting rampage at Fort Hood, Texas, Thursday.

The Fayetteville parade started at Hay and Robeson streets at 11 a.m. It featured more than 100 entries and a flyover. A Veterans Day concert was held in Festival Park around 1 p.m., featuring Telluride, Dakota Rim and the Stars & Stripes Singers.

The Raleigh parade stepped off from Davie and Fayetteville streets at 9:15 a.m.

"It is our way of saying thank you to all the veterans in the area,” parade organizer Harvey Yates said.

Marine veteran Michael Bishop said attending the parade was a way to show support for the military.

"Just because I was shown support when I was in, you know, I want to continue that,” he said.

Travis Williams also said he wanted to show his appreciation.

"We hate war, but we love the troops. So we hope to see a lot of them come home soon,” he said.

"I just think that they are cool because they all have on different jerseys and different flags,” 6-year-old Isaiah Williams said while watching soldiers march in the parade.

See a map of the parade route.

The grand marshal was Anne Perry Capucille, a Raleigh native who rose to the rank of staff sergeant during three years of service in World War II. Capucille served in the Medical Corps, Women's Army Corps and Women's Army Auxiliary Corps, 12th Company, 6th Regiment. Since, she has been active with the Veterans History Project, which records veterans' stories.

A flyover by military aircraft kicked off the State Capitol ceremony at 11 a.m. The 44th Army National Guard Band buglers played taps, and a wreath-laying honored deceased veterans from all wars.

A concert by the Enloe High School band ended the ceremony.