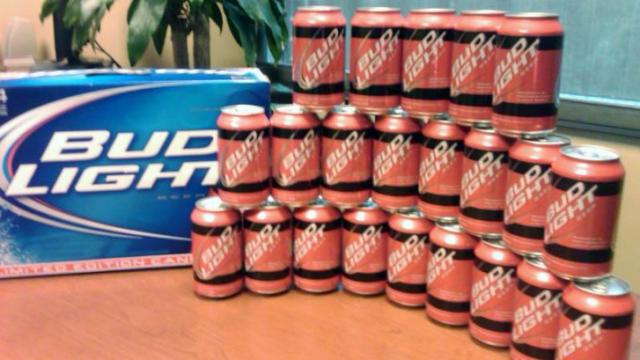 Raleigh, N.C. — A new marketing campaign from Budweiser has generated an outcry from college officials nationwide.

The so-called "fan cans" package Bud Light beer in cans that mimic school colors for many campuses. Red-and-black cans of beer can be found in convenience stores near the North Carolina State University campus, for example, while purple-and-gold cans are  sold in Greenville near East Carolina University.

The campaign is gearing up just as football season and tailgating start.

The Federal Trade Commission has criticized the Bud Light campaign, and more than two dozen universities have asked Anheuser-Busch Inc. to pull the fan cans from their areas, saying they don't want to encourage excessive or underage drinking.

Dick Christie, N.C. State associate athletic director, said the university has joined other members of the Atlantic Coast Conference in a formal letter to Anheuser-Busch requesting that the fan cans not be marketed near ACC campuses.

Carol Clark, vice president of corporate social responsibility for the brewer, said in a statement that beer distributors aren't required to stock stores with the colored cans. About half of Anheuser-Busch's wholesalers are participating in the fan can marketing program, she said.

"We place great value in the relationships we’ve built with college administrators and campus communities across the country. Certain cans are not being made available in communities where organizations had asked us not to offer them," Clark said.

"Anheuser-Busch has a longstanding commitment to promoting responsible drinking," she said. "Our company’s position on college drinking is clear: If students are 21 or older and choose to drink, we want them to do so responsibly. If they are under 21, we want them to respect the law and not drink."

The Rev. Mark Creech, executive director of the Christian Action League of North Carolina, said his group is encouraging parents to lobby university administrators nationwide to file complaints with Anheuser-Busch, with the goal of getting the colored Bud Light cans pulled off store shelves everywhere.

"Kids are going to drink regardless. We always have, and we always will," Stephenson said.