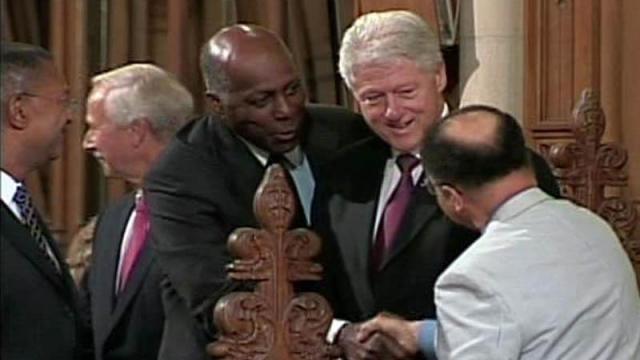 Franklin, who died in March at age 94 of congestive heart failure, insisted that the memorial service be held on June 11, which would have been the 69th wedding anniversary for him and his late wife, Aurelia, a Goldsboro native who died in 1999.

"My parents were a marvelous couple and a powerful team," John Whittington Franklin said at the start of the two-hour service.

Franklin recalled fishing with his father and learning at the dining table from both of his parents. Other friends and relatives also remembered the lessons John Hope Franklin would pass on in casual settings.

"I cannot recall a time in his presence when I did not learn from him," civil rights leader Vernon Jordan said.

John Hope Franklin was a lifelong educator, teaching at St. Augustine's College in Raleigh and the North Carolina College for Negroes, the predecessor to North Carolina Central University, in the 1940s before moving on to Howard University, Brooklyn College and the University of Chicago.

"(His work) opened the door for other scholars to come behind him, using sources he indicated in his own work," said Dennis Rogers, a political science professor at North Carolina A&T State University, who attended the memorial service.

His seminal book, "From Slavery to Freedom: A History of African-Americans," has sold millions of copies and been translated into six languages.

Evelyn Higginbotham, a Harvard University history professor who co-authored the ninth edition of the book, said during the service that Franklin's work meant "black contributions to America no longer stands at the back door of history."

Franklin returned to the Triangle in 1983, when he was named the James B. Duke Professor of History at Duke, and he also taught legal history in the School of Law. His relationship with Duke spawned the John Hope Franklin Center for Interdisciplinary and International Studies and the Franklin Humanities Institute.

"John Hope was part of the cadre of historians who rediscovered the African-American history that is so essential to this country," said Margaret Humphreys, a Duke history professor who attended the memorial service.

Duke President Richard Brodhead told the crowd at the service that Franklin's ramrod-straight posture made him "a physical emblem of human dignity," and he said he relished their long conversations on history, politics and other subjects.

"Though I did not meet John Hope Franklin until he was 90, I too knew him in his prime," Brodhead said.

Former President Bill Clinton closed the service by recalling Franklin's work as chairman of Clinton's national task force on race a decade ago. The group was criticized by conservatives for not including opponents to affirmative action and was labeled as a failure by civil rights advocates for issuing a series of recommendations that some felt weren't strong enough.

Despite the attacks from all sides, Franklin "soldiered on," Clinton said.

"He did what he always did – he did the job at hand – and he did a magnificent job," Clinton said. "After being in a country known for our divisions from 1968 to 2008, now people know us as a country known by our unity. His life and work in no small measure helped produce that."

Clinton awarded Franklin the Presidential Medal of Freedom, the nation's highest civilian honor, in 1995, and he related an incident where a woman mistook Franklin for a coat-room attendant at a swanky club in Washington, D.C., the night before he received the award.

"He was the perfect angry, happy man," Clinton said, noting Franklin didn't appreciate the woman's slight but never allowed it to affect his dignity.