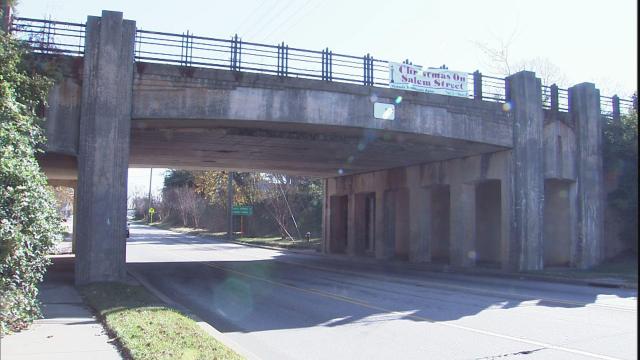 Apex, N.C. — Drivers and town leaders in Apex are raising concerns about a bridge that appears to be shedding concrete.

The CSX railroad bridge straddles N.C. Highway 55 and carries about a half dozen trains a day. Roughly 25,000 vehicles pass underneath daily.

Tim Donnelly, Apex public works director noted in an internal memo, "The bridge negatively impacts our citizens and clearly the traffic flow and safety of N.C. 55."

If drivers look up, they can see cracked concrete and gaping holes. Steel wiring is exposed. The bridge supports bear the marks where trucks have hit it.

Apex officials have asked the state Department of Transportation to inspect the bridge because it has visible rebar.

Don Idol, assistant state bridge inspector, said there is not much the DOT can do.

"The railroad actually owns the bridge. DOT does not own the bridge," he pointed out.

DOT inspectors check the railroad bridge every two years. The last inspection was March 2007. They look at the bridge's clearance, not the condition. To do so, Idol said, would be trespassing.

A CSX representative told WRAL News on Friday that the bridge's steel girders are strong as ever. The concrete, he said, is primarily cosmetic.

The DOT and drivers disagree.

"From a safety standpoint, something falling off, a piece of concrete falling off would probably be one of the more serious risks," Idol said.

That's just what concerns Kim Smalls. "If you're stopped under there if a train comes by, you never know with the weight and the cracking will do," she said.

"It's not cosmetic when it hits my car and damages my car and causes an accident under the bridge," she said.