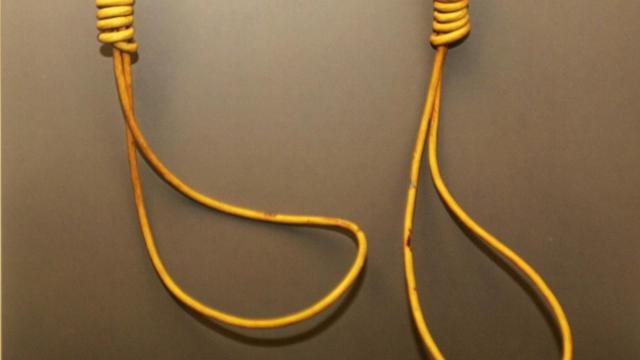 Raleigh, N.C. — Members of the North Carolina Public Service Workers' Union gathered in Raleigh Saturday to speak out against what they say is a growing rash of workplace hate crimes.

On Thursday, Nov. 5, North Carolina State University police found a 10-inch-long noose made of toilet paper hanging in a restroom stall in the Sullivan Shops Building. The building, off Sullivan Drive, is part of the university's motor pool and is accessible only by employees with keys.

The workers reported them to Larry Howell, director of facilities maintenance and operations, who ordered them to throw away the nooses. The workers claimed that Howell and other university administrators treated the incident as a prank.

UE-150 officials said the nooses appeared after Mackey complained of discrimination in the hiring for an electrician position, for which he had applied. The hiring process was reopened, according to the union.

UNCC officials investigated the incident and determined it did not warrant filing criminal charges.

The public workers' union issued a call for "an end to racist intimidation at the workplace." It cited incidents in state-owned workplaces in Rocky Mount and the Department of Transportation, as well as in Jena, Louisiana.

"This intimidation is part and parcel of the institutionalized racism that maintains the majority of blacks in the lowest paying jobs and denies them real and equal opportunities for advancement. This racism hurts all workers in those jobs regardless of race," the union press release stated.

"Many workers and citizens, black and white, are outraged at these acts of intimidation and want an immediate end to these and other racist acts."

The union demanded the termination of Howell, any workers who might be involved in making the noose and administrators if they refused to investigate the incident.

The union also asked the state to "establish strong policies against all forms of race hate and intimidation" and to "end discrimination in hiring, job assignments, promotions and discipline."

The NCSU student government passed the Racism and Hatred Incident Act less than a week after a noose was found there. The resolution called for a university policy on hate crimes and independent investigation and prosecution of the incident.