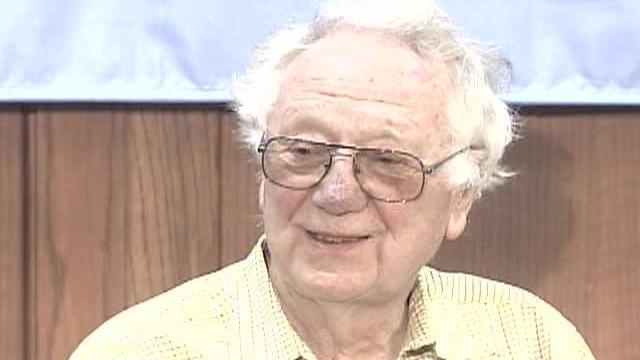 Chapel Hill, N.C. — A professor from the University of North Carolina at Chapel Hill won the Nobel Prize in medicine Monday along with two colleagues.

Dr. Oliver Smithies is the first full-time UNC faculty member ever to win the prize. The prestigious honor was awarded to Smithies for his research in genetics.

"It helps people by increasing our knowledge. That's very important. What's the use in having a circuit diagram of a TV set if you don't know what it means?" Smithies said.

Smithies, 82, is a professor of pathology and laboratory medicine at UNC. He received phone call from Stockholm at 5 a.m. Monday with the message the he was a winner of the Nobel Prize in medicine.

"He's most effective in that he always asks the question that you think you should know, but you didn't get around to looking into it, and [he] asks you that question," student Heather Doherty said.

In the mid-1980s, while at the University of Wisconsin, Smithies helped develop a technique called "gene targeting." That led to the creation of transgenic mice – or "designer mice" – that replicated human diseases such as diabetes, cystic fibrosis and cancer.

Smithies' lab produced the first animal model of cystic fibrosis, a disease caused by one defective gene. His method allowed scientists to study specific genes by creating "knock-out mice." By knocking out a specific gene, he said, researchers can out find what happens when it is missing. Smithies uses the analogy of a car to explain the method: "If you knock out the wheel, then it doesn't run anymore. It might even turn over. It might even kill you."

The Nobel committee said "gene targeting in mice has pervaded all fields of biomedicine. Its impact on the understanding of gene function and its benefits to mankind will continue to increase over many years to come."

Smithies said the Nobel Prize gives him a sense of peace, but he is not planning to quit his job just yet. He maintains a research lab at UNC, where he said he still works seven days a week.

The other two Nobel Prize honorees, Mario R. Capecchi of the University of Utah's Howard Hughes Medical Institute and Sir Martin J. Evans of the United Kingdom, will share a $1.54 million prize with Smithies.

The Nobel Prize in medicine is the first of six awards given out each year. The others are in chemistry, physics, literature, peace, and economics.

Winners will be announced daily for the next week.

The prizes will be awarded Dec. 10 in Stockholm, Sweden.