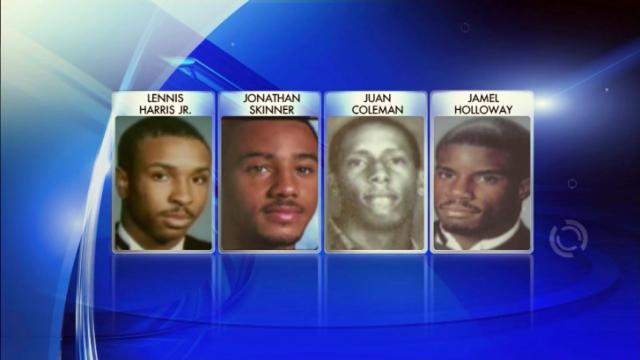 Durham, N.C. — Police have increased its reward to $3,000 for information about the 2005 execution-style slayings of four men at a Durham townhouse.

"We believe several people in our community have additional information regarding this violent crime," Cpl. David Addison, coordinator for Durham Crime Stoppers, said in an e-mail Thursday.

In October, authorities arrested Rodrick Vernard Duncan in connection with the Nov. 19 shootings of Juan Coleman, 27, Jamel Holloway, 27, Lennis Harris Jr., 24, and Jonathan Skinner, 26, inside the residence at 2222 Alpine Road.

But Addison said investigators are still "actively pursuing every lead" and want more information about the case and any additional assailants.

The four men were found lying on the carpet of a small, second-floor bedroom of the townhouse, each shot in the head. Two other people were injured.

Investigators said the shootings were not random acts and that the victims were probably targets of a drug-related robbery. Police Chief Steve Chalmers, in a Nov. 21 interview, said the victims knew the men responsible for shooting them and that the assailant went to the townhouse with every intention to kill them.

Witnesses told police that they saw three men seen running from the area of the shooting after they heard shots. One was described as a black male with a light complexion, standing 6 feet to 6 feet 2 inches tall and weighing 180 pounds. He was wearing dark jeans and a black-and-white jacket.

The second man fleeing the scene was described as a stocky black male, standing 5 feet 10 inches tall and weighing 200 pounds. He was wearing a burgundy flight jacket and jeans.

The third man was described as a black male with a medium complexion, standing 5 feet 10 inches tall and weighing 170 pounds. He was wearing a black flight jacket and blue jeans.

An addition to the Crime Stoppers reward, the Governor's Crime Commission is also offering up to $10,000 for information leading to an arrest in the case.