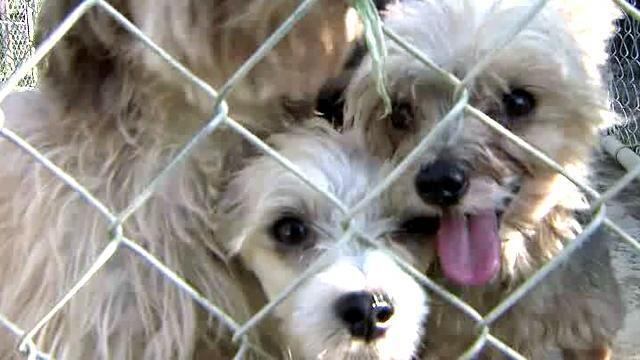 Raleigh, N.C. — The SPCA of Wake County will soon put 39 dogs taken from a Brunswick County puppy mill a week ago up for adoption, officials said Friday.

Brunswick County deputies and animal rights advocates rescued 163 dogs, 26 birds and one cat in an Aug. 3 raid of a breeding operation at a Leland mobile home.

Many of the dogs were matted, caked in filth, covered in fleas and in need of veterinary care, and some had broken jaws from severe tooth decay. The double-wide trailer where they were housed in cages had no electricity, authorities said.

"I will never forget that day," said Darci VanderSlik, community outreach coordinator for the SPCA of Wake County.

At least one puppy died after the rescue, but the rest of the dogs were sent to animal shelters as far away as Greensboro and Charlotte, officials said.

The dogs cared for by the SPCA have received veterinary care in recent days and undergone extensive grooming, officials said. Most of them will be put into foster homes for socialization before being put up for adoption.

VanderSlik said nursing the dogs back to health will take more than medical treatment.

"I think emotional damage – emotional and behavioral damage – that needs time, and it's going to take a lot of time for them to come around," she said.

The SPCA doesn't expect a problem finding loving homes for the dogs. VanderSlik said people should check the organization's website or Facebook page in the coming weeks for more information.

"If you look at these faces, who can say no?" she said.

Andrew and Amelia Millis, of Wilmington, were charged with animal neglect and animal cruelty and are being held in the Brunswick County jail under $1.5 million bonds.