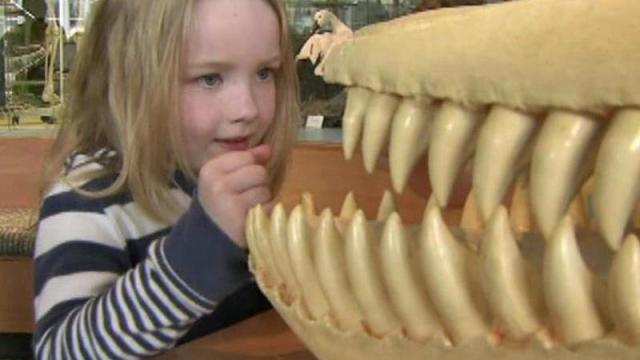 Raleigh, N.C. — More than 70,000 people passed through the doors of the new wing of the North Carolina Museum of Natural Sciences over 24 hours. The Nature Research Center opened Friday afternoon and quickly made a memorable first impression.

The 80,000-square foot interactive education center, which features a 70-foot-diameter globe outside and more than 100 interactive exhibits, even caught some who visited by surprise.

Consistent crowds filled the new wing, flocking to high-tech exhibits and the Daily Planet Theater, a spherical globe that uses 30 million pixels to depict scenes and stories about nature science and research in North Carolina.

"It's probably the coolest thing," Victoria Yauch said of the theater. "The graphics are amazing."

And for all the fanfare, the leaders responsible for making the new wing possible still have education in mind. They want to bring science to life first-hand.

"We want science to be a conversation anybody can have," the museum's Steve Popson said. "We want folks to understand it means something to everyone of all ages,"

Aaron Stetson said the museum has done just that, adding that the hands-on experience was more fulfilling than reading from a science book.

"Being here, you can touch, feel and discover what's real," he said.

Meg Lowman, director of the new wing, encouraged visitors on Friday to explore in the Nature Research Center's opening weekend.

"Everything will be open, including the green roof, so don't miss going up to the top," she said. "That's really awesome. There will be telescopes out there and lots to see from top to bottom."

The museum returns to normal hours Sunday. It will be open from Noon to 5 p.m. Sunday and 9 a.m. to 5 p.m. weekdays and Saturdays. Admission is free.