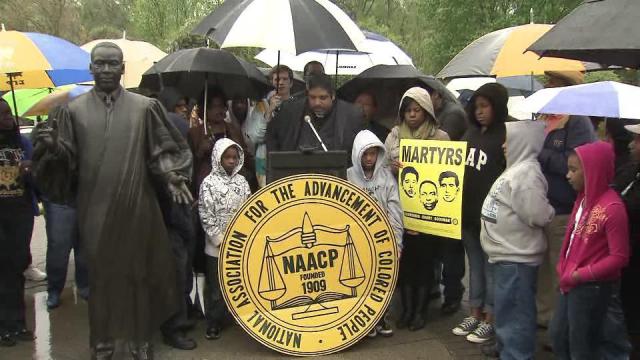 Raleigh, N.C. — Groups in the Triangle held a prayer vigil and rallies Saturday to call for an arrest in the case of an unarmed Florida teen who was shot and killed in February by a neighborhood watch captain.

Rev. William Barber, president of the state NAACP chapter, said that marches and vigils should continue until George Zimmerman, who admits that he shot 17-year-old Trayvon Martin, is arrested.

"We must demand that the black bodies and the brown bodies of our boys and men be respected," Barber said at a rally at the Martin Luther King J. Memorial Gardens in Raleigh.

In Chapel Hill, a group gathered at University Mall for what they called the "Trayvon Martin Love Walk." They walked to the post office on Franklin Street and stood in silence for one hour.

The rallies were part of a day of action called by the NAACP and other civil rights leaders in the aftermath of the Feb. 26 slaying in Sanford, Fla., that drew the attention of the country.

Zimmerman claims that he followed Martin to report his location to police and that the teen attacked him from behind as he walked back to his truck.

Martin was unarmed and walking back from a convenience store after buying candy for his younger brother.