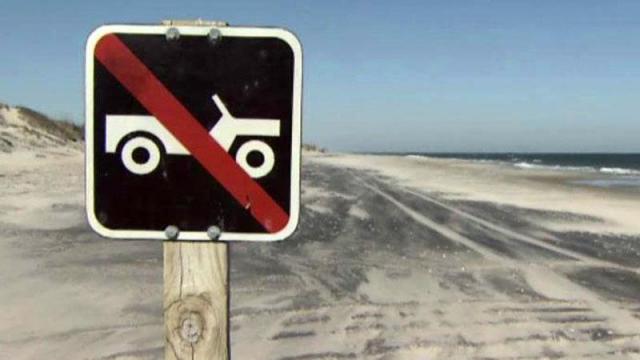 Manteo, N.C. — New rules and regulations for driving on the beach at Cape Hatteras National Seashore went into effect Wednesday, drawing ire from people who say the area's best fishing and recreation spots will no longer be accessible to beach users.

A permit, which costs $50 for a week's pass and $120 for the entire year, is now required to drive on the beaches. New rules also restrict where off-road vehicles, or ORVs, can be used.

"There is a great deal more ORV traffic than there was years ago," said beach user John Newbold.

The increased traffic caused the National Park Service to come up with a plan to balance beach use and conservation.

But the off-roading restrictions have stirred up some controversy, especially with regard to an area near the Cape Hatteras Lighthouse called Cape Point.

Groups like the Cape Hatteras Access Preservation Association, which filed a federal lawsuit last week to try to stop the new rules for being implemented, say that Cape Point's new designation as a "pedestrian only" area cuts off access for many beach users.

"The amount of beachfront closed and controlled by this rule is absolutely excessive," said CHAPA spokesman Jim Keene.

He said it isn't feasible for fishermen or beachgoers to walk to Cape Point, which used to be accessible by off-road vehicles, with their gear.

Newbold, however, who has been driving the beach for nearly five decades, said he thinks the changes are inevitable.

Permits, which are required for beach driving in several locations from Ocracoke Island up to Bodie Island, can only be obtained in person at one of the centers along the seashore. People applying will need to provide their driver's licenses and vehicle registrations and watch a seven-minute video outlining the new rules.