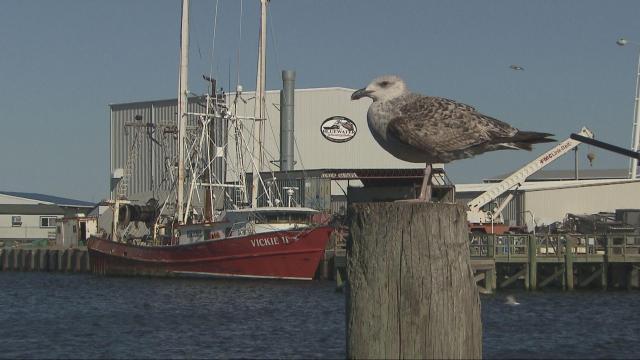 Wanchese, N.C. — Imagine Interstate 40 being shut down, with no access to Raleigh, Durham or Research Triangle Park, no trucks able to unload their cargo and stores closing because of the lack of goods. That’s what some fishermen are facing on North Carolina’s coast.

Their highway, the Oregon Inlet, is often too shallow for commercial fishermen to navigate due to sand that has filled the channel. They’ve spent more than a quarter of the past year with no highway to get commercial fishing boats in or out.

The same thing happened early last year when the inlet was shut down for more than two months and again after Hurricane Irene.

Gov. Bev Perdue convinced the federal government to step up with a large dredge and clear the channel. She has vowed to keep working with the U.S. Army Corps of Engineers to keep the inlet open.

The Corps of Engineers says it has a fraction of its original budget to keep the channel clear. That budget barely covers the cost of routine surveys and leaves little for the thousands of dollars a day it takes to operate a dredge.

Mike Daniels, with the Wanchese Fish Company, says dredging is not a permanent solution. Some on the coast are renewing their plea for a jetty along the north side of the inlet to stop the flow of sand. A jetty would cost $50 million and have significant environmental impact. The federal government nixed the idea in 2003.

“We've built boats. We've built fish houses. We've committed to staying here,” said Daniels, who says he feels like his community and livelihood have been forgotten.

Without a better solution, Daniels says, his community will die. The only grocery store in the village has already shut down.

“We need some help, and right now, we don't believe we're getting any,” he said.

Mark Vrablic, who runs Etheridge Seafood, calls the problem “devastating.” He said he would normally have a cooler full of fish. On the day a WRAL News photographer visited, the cooler was empty, except for a box of collard greens Vrablic’s uncle brought home for dinner.

“There's never been an employee laid off at this company for lack of work,” he said. “We love our employees. They've been good to us. We've been good to them, but we all know the bank account is dwindling down.”

Some fish house workers, like Tony Gibbs, are being kept on the books with minimum hours. The married father of three says he and his family had a tough Christmas.

“You go from 40 hours (a week) to 20 hours, and there goes half your livelihood. So, it affects us big time,” Gibbs said.

Recent dredging made it possible for smaller boats to get into the inlet Thursday. By Monday, the fishermen hope some of the bigger boats can do the same. The larger boats have been taking their catch to Virginia for the past two months.