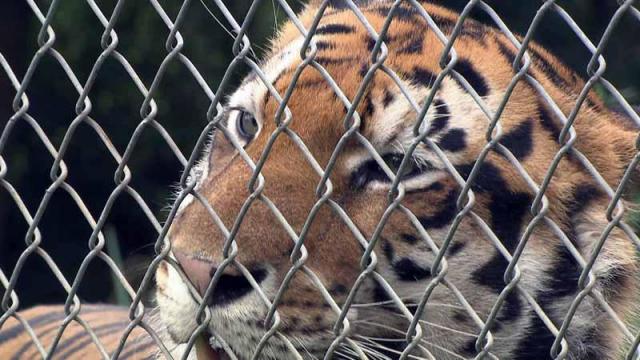 Pittsboro, N.C. — Like Ohio, where an animal park operator released dozens of lions, bears and other creatures Tuesday, North Carolina has no license or permit requirements for people to keep most exotic animals.

Deputies near Zanesville, Ohio, shot 48 wild animals in a big-game hunt across the Ohio countryside late Tuesday and Wednesday after the park owner threw their cages open and committed suicide in what authorities said may have been one last act of vengeance against neighbors and police.

Ten U.S. states, including North Carolina and Ohio, don't regulate or track dangerous animals that people sometimes keep as pets. Endangered species like tigers cannot be sold across state lines, but selling them within North Carolina is legal.

"In North Carolina, your neighbor can own (a tiger) in his backyard unless you live in a county or a municipality in which it's illegal," said Pam Fulk, director of Carolina Tiger Rescue in Pittsboro.

Because it accepts donations to support its operations, the sanctuary is regulated by the U.S. Department of Agriculture. The USDA also oversees animals where they are bought and sold or used for research.

With no state or federal rules, it's left to counties and cities to regulate private facilities like the Muskingum County Animal Farm in Ohio.

Most Triangle-area counties ban all dangerous animals, but Johnston and Vance counties are among those that allow them with permits. Some counties in the western part of the state have no restrictions at all.

Many county bans also have exceptions for educational purposes. So, if a private sanctuary offers free tours to school groups, it may be exempted from local rules.

A pet tiger killed a Wilkes County 10-year-old in 2003, prompting an effort to draft statewide regulations on exotic animals. But the legislation failed, and another attempt in 2009 was eventually narrowed to regulate only venomous reptiles.

"North Carolina has no rules at all," Fulk said, noting that about half of Carolina Tiger Rescue's 75 big cats were rescued from roadside zoos or private owners who thought they would make good pets.

Local ordinances aren't even enforced in some instances, she said, which allows facilities like the Ohio animal farm to continue to operate.

"He’s been in trouble consistently with various authorities for various infractions, including animal cruelty," she said of Terry Thompson, the owner of Muskingum County Animal Farm. "So, my question is, why did he even still have animals? This could have been prevented.”

Kim Alboum, North Carolina director of the Humane Society of the U.S., said a patchwork of local laws isn't enough. She wants to see a statewide law for exotic animals and is frustrated by the lack of attention from legislators.

"(It's hard) to make them understand that these are just simple common sense rules. People should not be allowed to have dangerous animals in their backyard," Alboum said.

"Unfortunately, exotic and dangerous animals don't respect county lines," she said. "It's impossible to keep the general public safe when we don't know from one county to another what the rules are and what could be in somebody's backyard."