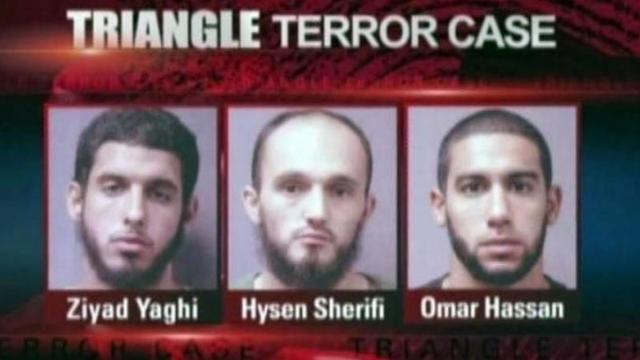 NEW BERN, N.C. — A jury will begin deliberations Wednesday in the trial of three men accused of being members of a terrorist cell based in Johnston County.

Mohammad Omar Aly Hassan, 23, Ziyad Yaghi, 22, and Hysen Sherifi, 26, face multiple felony charges related to allegations they conspired to attack targets overseas. Sherifi also is accused of plotting an attack on the Marine base in Quantico, Va. Closing arguments in their case were completed on Tuesday.

A federal indictment unsealed in 2009 alleges that they and five other Triangle men raised money to buy assault weapons and conduct training exercises and that they arranged overseas travel and contacts to help others carry out violent acts on behalf of a radical jihadist political agenda.

“What we have before us is a stark and frightening reality,” Jason Kellhofer of the U.S. Justice Department said Tuesday.

The government spent three weeks presenting its case against the trio, including testimony from the accused ringleader of the terror cell, Daniel Patrick Boyd, his two sons and confidential FBI informants.

Boyd pleaded guilty in February to federal terrorism charges. Two of his sons also have pleaded guilty to charges associated with the case. All three will be sentenced later.
An FBI search of Daniel Boyd's Willow Spring home in 2009 turned up about two dozen guns and more than 27,000 rounds of ammunition. Authorities said he and the other men trained in the weeks leading up to their arrest, practicing military tactics with armor-piercing bullets in Caswell County.

Another defendant, Anes Subasic, has declined to have an attorney represent him and will be tried after the trial for the others.

Hassan and Yaghi presented no evidence in their defense, while Sherifi chose to testify Monday.

When prosecutors confronted Sherifi with audio recordings in which he appeared to be plotting attacks, he said he was merely translating information for others, was quoting anti-American statements made by others or was only trying to please an FBI informant, who pressured him into supporting radical actions.

Sherifi also denied going with Boyd and his sons, Dylan and Zakariya, to Caswell County for military training exercises. He said the group was only firing guns for fun and that he knows nothing about weapons.

During closing arguments, prosecutors said the three defendants had a mutual understanding and an objective. They pointed to 77 phone calls between Yaghi and Daniel Boyd as evidence of a relationship and not just an acquaintance.

The Facebook pages of Yaghi and Hassan were also mentioned. The prosecution noted that Yaghi's favorite movies were about martyrs and that he had the quote "War is deception" on his page.

Defense lawyers say the men were not privy to Daniel Boyd's plans and the government's case comes down to prosecuting Muslim men for debating controversial ideas within their religion and watching jihadist videos on their computers.

"The atmosphere in the country post 9/11 concerning Islam and Muslim is so heavily weighted in bias that the government has been getting convictions in case after case," said Mauri Saalakhan, who is with the Washington D.C.-based Peace Through Justice Foundation. "If past is prologue, those young men will end up being convicted despite the evidence that's in their favor."