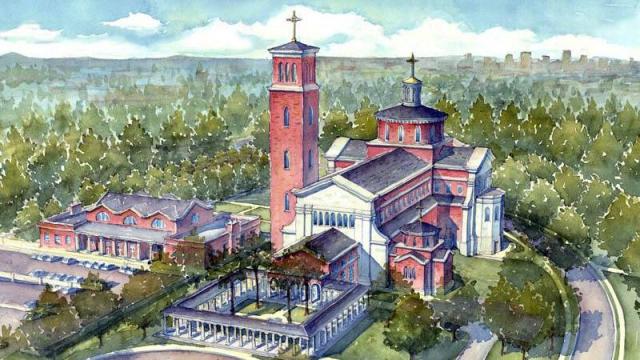 The 2,000-seat Holy Name of Jesus Cathedral will be on the 39-acre former site of Cardinal Gibbons High School, west of the Dorothea Dix Hospital campus between Centennial Parkway and Western Boulevard.

Burbidge said there is no time-line for construction, but officials hope to break ground by the middle of 2013. The project is expected to cost $75 million to $90 million, and he said the diocese hopes to raise at least a third of the cost before breaking ground.

Fundraising will be difficult in the slow economy, he said, but he noted the fast-growing diocese has always risen to such challenges. The diocese already has about $10 million in hand, he said.

"We're not just building a beautiful, glorious, magnificent church," he said. "We are building a vibrant campus."

The diocese has hired a Washington, D.C., architect to design the cathedral campus, which Burbidge said would host concerts of sacred music and lectures as well as liturgical services. A two-story gathering hall and a three-level underground parking garage also are planned for the campus.

Burbidge said diocesan officials have been studying the prospect of a new cathedral since late 2009. The 54-county diocese has grown by more than 40 percent since 2000, he said, and Sacred Heart Church, Raleigh's existing cathedral, is too small to accommodate increased needs.

Officials looked at possibly locating the new cathedral downtown, he said, but there wasn't enough room there to accomplish everything they wanted to do.

The diocese owns the Cardinal Gibbons land, which is part of a 400-acre tract that Father Thomas F. Price, the “Tar Heel Apostle” and first native North Carolinian to be ordained a Catholic priest, purchased in 1897. Price established an orphanage there two years later, and he established Holy Name of Jesus Chapel there as well.

Sacred Heart, at the corner of Hillsborough and McDowell streets downtown, is the smallest Catholic cathedral in the continental U.S., officials said. It was built in the early 1920s and can hold only 320 people.

Burbidge said it will remain an active church once the new cathedral is built.

"Sacred Heart has a long commitment, as does this Diocese of Raleigh, of social outreach to the poor and those most in need in downtown Raleigh," he said.

The cathedral campus will help the diocese expand those outreach efforts, he said.

"I clearly understand this is a monumental, historic project," he said. "I wake up every morning and say, 'Lord, are you sure you want me to do this?' And the answer keeps coming back, 'Yes.'"