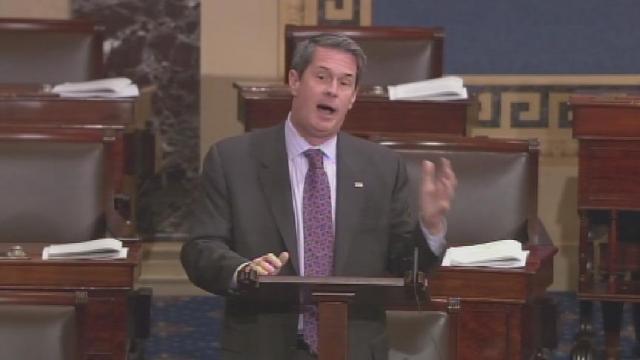 WASHINGTON, D.C. — Republican Sen. Richard Burr was among 10 senators who voted against a $626 billion defense spending bill early Saturday, while Democratic Sen. Kay Hagan was among 88 who voted for it.

The defense bill was the last of 12 annual spending bills that Congress had to pass for the budget year that began Oct. 1. The latest stopgap measure to fund the Pentagon expired at midnight Friday.

Burr criticized the bill for not funding the troop increase in Afghanistan, ordered by President Barack Obama, and for including $18 billion on what he described as "unrelated spending."

“I have always been proud to vote for the funding of our troops and our national defense. However, I am disappointed that this year, the defense funding bill is filled with spending that is unrelated and not offset through savings elsewhere in the government," Burr said in a statement.

"In a time of war, for Congress to ignore this funding shows a disregard for the servicemen and women who are away from their families this holiday season fighting on our behalf," he continued.

The bill includes two-month extensions of unemployment benefits for the long-term jobless, health care subsidies for those out of work, highway and transit funding, three provisions of the terrorism-fighting Patriot Act, and legislation shielding doctors from a steep cut in Medicare payments.

Hagan praised the passage of an amendment that she and Burr had co-sponsored. The amendment prevents the Navy from disposing water contamination claims before studies by the U.S. Centers for Disease Control are finished.

“(This) critical amendment will help bring closure to our former Lejeune families,” Hagan said in a statement. "The Navy must commit to funding the remaining CDC water contamination studies, and this amendment makes sure no claims are dismissed before the studies are complete. I will continue working to help these families get answers."

The legislation also includes $1.25 million to establish three National Guard Family Assistance Centers in North Carolina to support families that do not live near bases.

“Family Assistance Centers ensure that members of the North Carolina National Guard and their families have access to essential services no matter which part of the state they call home,” Hagan said.

Other funding directed by a number of North Carolina lawmakers includes: