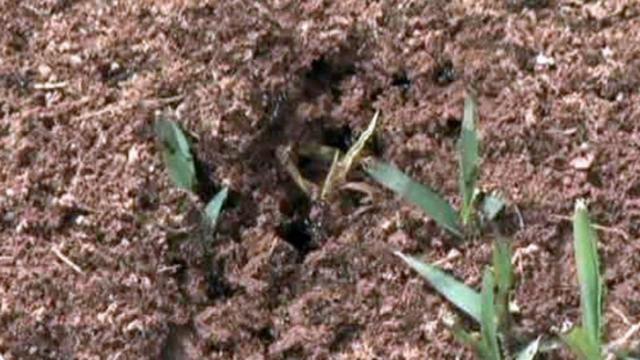 Raleigh, N.C. — A bill introduced in North Carolina General Assembly could lead to a new study on controlling the fire ant population.

House bill 513 would create a legislative study committee on the impact and control of the insects.

In October 2007, a quarantine was put into effect in some counties to contain the ants. The quarantine now includes portions or entire areas of 67 counties, including Wake.

“This is the time of the year that they get active,” said Dr. Charles Apperson, a North Carolina State University entomology professor.

Apperson said fire ants are spreading quickly. Ten years ago, there were only a few hills in Wake County.

“During the big building boom that went on in Wake County, we had a lot of ants imported (through the soil),” Apperson said.

Items such as hay bales and earth-moving equipment containing soil were moved to areas outside of the quarantined, Apperson said.

Right now, Apperson said there is no way to contain the insects on a large scale. On a small scale, individual homeowners, especially parents, wage war every day with these pests.

Wanda Jackson said her children battle with the ants often. The bites hurt and cause a “few tears," she said.

“Luckily our kids aren’t allergic to them,” Jackson said.

Kelly Marin found out she was allergic to the ants when one bit her foot.

“Within about 30 seconds my whole foot was swollen and puffed out,” Marin said.

Apperson estimates the entire state will be under a fire ant quarantine within the next 20 years.

For individual homeowners who want to get rid of fire ants, Apperson recommends toxic baits.
SUGGEST A CORRECTION