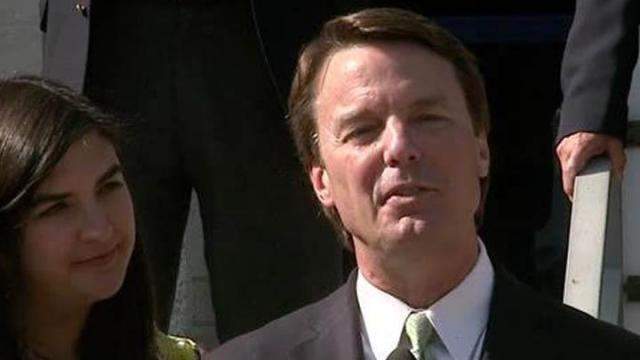 RALEIGH, N.C. — Federal prosecutors on Wednesday ended their pursuit of criminal charges in connection with John Edwards' efforts to hide his pregnant mistress during his 2008 presidential campaign.

“We knew that this case – like all campaign finance cases – would be challenging, but it is our duty to bring hard cases when we believe that the facts and the law support charging a candidate for high office with a crime," Assistant U.S. Attorney General Lanny Breuer said in a statement. "Last month, the government put forward its best case against Mr. Edwards. ... The jurors could not reach a unanimous verdict on five of the six counts of the indictment, however, and we respect their judgment. In the interest of justice, we have decided not to retry Mr. Edwards on those counts.”

Edwards defense team has asked Eagles for an outright acquittal on all counts.

"As we stated in our motions and arguments in court, the novel theory of campaign law violations charged by the Justice Department is not a crime. It should be addressed, if at all, by the Federal Election Commission," defense attorney Abbe Lowell said in a statement.

"While John has repeatedly admitted to his sins, he has also consistently asserted, as we demonstrated at the trial, that he did not violate any campaign law nor even imagined that any campaign laws could apply," Lowell said. "We are confident that the outcome of any new trial would have been the same. We are very glad that, after living under this cloud for over three years, John and his family can have their lives back and enjoy the peace they deserve."

Former U.S. Attorney George Holding, who launched the investigation into Edwards' campaign finances, fended off criticism that the government overreached in the case.

"If I'd been in the business of avoiding hard cases, we never would have prosecuted any of the political corruption cases," said Holding, now a Republican candidate for Congress. "It was a difficult case. The prosecutors in the courtroom did an excellent job. The federal agents from the FBI and the IRS did an excellent job. But, at the end of the job, it's the jury's call."

Edwards couldn't be reached for comment Thursday, but longtime friend David Kirby echoed Lowell in saying that the decision to end the case allows Edwards to finally move on.

"I'm very happy that the government has decided not to prosecute any further. I hope this ends a very difficult chapter in his life," said Kirby, a law school classmate of Edwards and his late wife, Elizabeth, and Edwards' former law partner.

"If Elizabeth was here, I'm certain she would say, 'Thank God this is over for Cate, Emma Claire and Jack,'" Elizabeth Edwards' close friend David "Mudcat" Saunders said, referring to her three children.

A federal grand jury indicted Edwards a little over a year ago on charges that he used nearly $1 million provided by two wealthy donors – Virginia heiress Rachel "Bunny" Mellon and Texas trial lawyer Fred Baron – to keep his mistress, Rielle Hunter, quiet and away from the media in the run-up to the 2008 primaries.

In five days of testimony during the month-long trial, former aide Andrew Young detailed schemes in which Mellon funneled money through a Charlotte interior decorator to him and his wife to pay for Hunter's expenses and in which Baron paid for charter planes and resort accommodations as Hunter and the Young family hopscotched across the country to evade tabloid newspaper reporters.

Young admitted under cross-examination, however, that he and his wife spent much of the money from Mellon and Baron on a house they were building near Chapel Hill and other personal expenses.

Bryan Huffman, the interior decorator, said he was disappointed in the government's decision.

"Mrs. Mellon gave that money for him to be president. She knew nothing of any mistress or illegitimate child," Huffman said. "(Edwards) dragged her sterling reputation through the mud.

"At the end of the day, all a person has is (his or her) good name, and he certainly doesn't have that."

A former chairman of the Federal Elections Commission also testified that the agency has never considered regulations for third-party payments to a candidate's mistress. An audit of Edwards' 2008 campaign finance reports was closed in April without any mention of the money from Mellon or Baron.

"It's a good thing it's over. I think a lot of money has been wasted," said Barbara Allen, former chairwoman of the North Carolina Democratic Party.