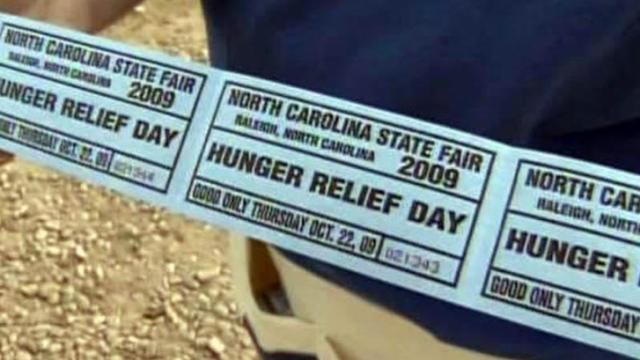 People attending the fair during the Food Lion Hunger Relief Day on Thursday received free admission by bringing four cans of food to any entrance gate. Fairgoers donated 237,534 pounds of food, an increase of more than 71,000 pounds from a year ago and more than the 2009 goal of 200,000 pounds, officials said.

The food donations are equivalent to 200,028 meals, officials said.

Hunger Relief Day at the Fair is one of the largest one-day canned-food drives in the state and benefits the Food Bank of Central & Eastern North Carolina and other food banks around the state.

“We thank the generous public for once again answering the call to action and are extremely grateful for the continued support of Food Lion and the N.C. Department of Agriculture,” food bank President and Chief Executive Peter Werbicki said in a statement.