Goldsboro boy finds a whale of a treasure 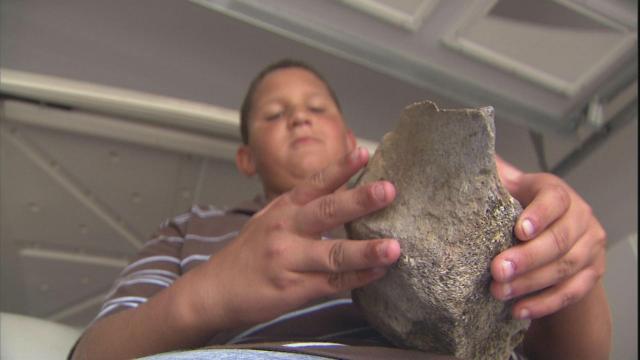 Goldsboro, N.C. — Little boys bring home the darnedest things – frogs, lizards, sticks and stones. For one 10-year-old Goldsboro boy, he brought home a treasure more than 400,000 times older than himself.

“It was about right here,” said Greg Williams, pointing to the spot in a Wayne County creek where he found his great find. “We were looking at rocks … It didn’t look like a regular rock.”

What he found was no rock. It was a whale vertebrae estimated to be 4 to 6 million years old.

“He's always been interested in things (and looking) for unusual things, so I was proud when he found something that we could trace back and find as old as it is,” sad Jamie Feil, Greg’s mother.

Greg and some friends were exploring a neighborhood creek last year when he found the fossil, but he just recently decided to take it to a museum to have it identified.

"It's a nice find,” said Vince Schneider, a curator of paleontology. “They're not rare, but you have to be in the right place at the right time."

While Greg's discovery may never hang in a museum, it has a value greater than a price tag.

"I think the value there is for him to treasure it as something he found that basically was never seen before for 4 to 6 million years before he saw it,” Schneider said.