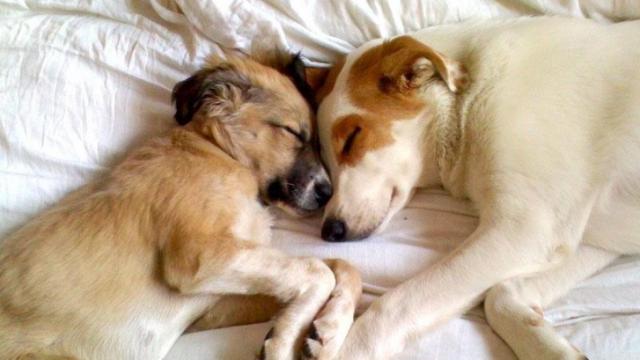 Fayetteville, N.C. — A Fayetteville soldier got a boisterous homecoming from a dog he rescued from the war-torn streets of Afghanistan, thanks to a charity animal-rescue program run by Internet search engine Dogpile.com.

The soldiers took the dogs back to their base and named them Jack and Emma. The men played with, cared for and bonded with the puppies during the rough months of their deployment, relatives said.

"Jack has been Dan's rock over there. When he is out on missions and sees awful things, he comes back to his dog, Jack, and is able to have comfort," Dan Barker's mother-in-law, Janice Rosengren, said.

"The things these men have to see and deal with truly force them to build a wall around their emotions. Jack has been so therapeutic to my husband and helped him through some of the toughest times," Dan Barker's wife, Lisa, said.

The soldiers decided they didn't want to leave their new furry friends behind when their deployment ended in mid January. However, bringing a dog from Afghanistan to the United States would be an expensive and cumbersome process.

In November, Barker contacted Dogpile.com after hearing about the search engine's Search & Rescue program, which donates money to the Society for the Prevention of Cruelty to Animals.

Dogpile.com agreed to pay for Jack and Emma's trip to America and their stay in customs.

"We feel so fortunate to have played a hand in such an emotional and memorable time for the soldiers, their families and the two puppies," said Stacy Ybarra, director of corporate giving for Dogpile.com.

After a two-week journey, the puppies arrived in New York City. There to greet them and take them home was Lisa Barker. She got the dogs accustomed to their new country, while Barker and Krause watched their pets by Web cam every day from Afghanistan.

Then, in late January, the men came home to their dogs – in Dan Barker's case, Jack and two Chihuahuas he already owned.

"(Jack's) doing good. He's getting more used to my dogs, and they're starting to play a little bit," Dan Barker said.

Dogpile.com wants to keep on making such special stories come true, Ybarra said. Every time a user does a search on the site, the company donates a portion of its revenues to the SPCA. By the end of 2009, the company hopes to have donated $1 million.

"Helping provide Jack and Emma safe and loving homes is what the Search & Rescue program is all about," Ybarra said. "We look forward to continuing to help many more animals in need by donating money through Dogpile searches."

For Jack and his adopted dad, the future is bright, Lisa Barker said.

"Jack and Daniel have formed a true companionship that I know will continue to grow over the years," she said. "I promise you Jack will have the most loving home and family a dog could ever ask for."