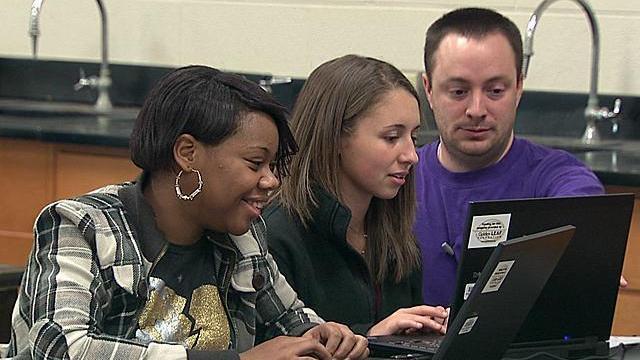 Tarboro, N.C. — Edgecombe school leaders say laptops for every high school student in the rural county will help prepare them to better compete in the 21st century global market.

Last week, the school began issuing laptops to its 2,100 ninth-, 10-, 11th- and 12th-grade students under a new initiative, 1:1 Laptop, which allows them and teachers to better utilize more technology for learning.

Approximately 400 teachers received laptops in August and spent the fall semester training how to best use them in the classroom.

Due to lower demand for tobacco and the loss of manufacturing jobs, Edgecombe is one of the most economically depressed counties in North Carolina. December unemployment figures released Friday put Edgecombe unemployment rate at 13.8 percent, the highest in the state.

"It's our goal that every child in rural North Carolina be given the same opportunity students have in Chapel Hill or Charlotte or Raleigh," said Dan Gerlach, president of Golden LEAF, which funds economic development projects in tobacco-dependent areas.

A $1.9 million grant from Golden LEAF, as well as a grant and donations from SAS Institute, helped pay for the program.

The school board paid an additional $900,000 from its current budget and revenue allocated to the school system from the North Carolina Education Lottery.

Under the program, each student must pay a $50 annual technology fee and register for a laptop with a parent or guardian. Both student and parent attend a required training course on proper and appropriate use, and the school holds students accountable for all computer behavior.

Filters will be put in place to monitor students' use of the Internet on and off-campus.

"It is monitored, and it is corrected," Witherspoon said.

If a laptop is lost, stolen or damaged, students can be charged anywhere from $150 to the full cost of the laptop to replace it, according to the school system's Web site.

The school system is also trying to establish Internet hotspots throughout the county for students who don't have Internet access at home. Some online homework assignments can be downloaded and taken home.

The school system will collect the laptops at the end of the school year and update them over the summer.