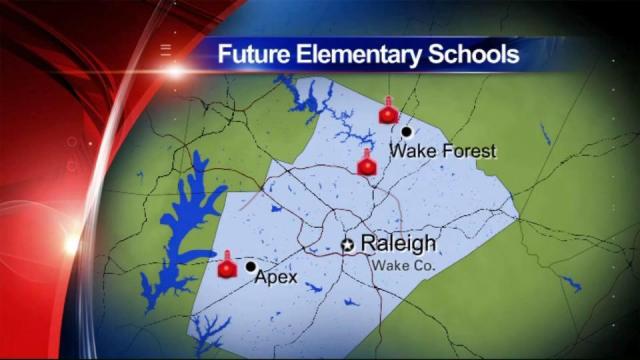 Given the projections, the school board's Facilities Committee voted 2-1Tuesday to recommend that the full board go along with a proposal to spend about $500,000 each for preliminary planning for the three sites.

The money should be available from savings in current bids being let under the district's Capital Improvement Plan,  Assistant Superintendent Joe Desormeaux told the committee.

Nonetheless, he said, projections of elementary students for the 2013-14 school year show that six of 10 planning areas in the county will be over 100 percent for the available seats.

Broadly, the overcrowding is projected for the central area of the county and to the north and west, projections show.

The school system already owns sites on the former northern Wake landfill off Durant Road, on the east side of Capital Boulevard and on Scotts Ridge Trail. Schools will be built there eventually, Haydon said, and preliminary planning has to happen some time.

Because construction bids are now lower than once expected because of the recession, "We're not taking dollars from anything else," Desormeaux said.

Reallocating money to planning would require school board and county commissioner approval, so planning probably could not start before November, Desormeaux and Haydon said.

Facilities planners in the school system break the county into 10 zones. Haydon noted that the planning zones are not related to whatever lines the student assignment process will draw. The board voted earlier this month to make the top priority trying to assign students to schools near their homes.

Board member John Tedesco's Student Assignment Committee is expected to take over a year to develop that plan.

The facilities zones and their projected use of all available elementary school seats for the 2013-14 year are:

If the schools aim for using 95 percent of the seats at each school to allow flexibility for new students during the year and other factors, overcrowding rises in the six zones and averages 106 percent countywide, the staff's projections show.