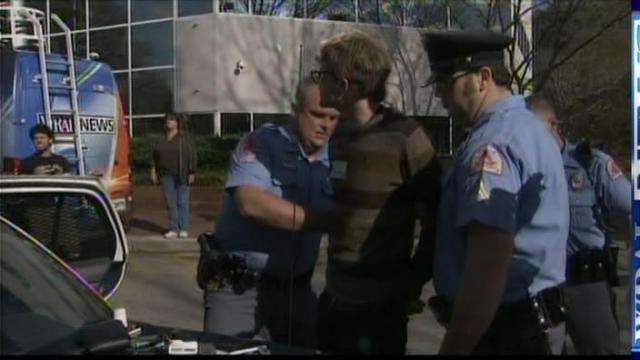 Raleigh, N.C. — Police on Tuesday afternoon arrested three people and removed more than a dozen others from the Wake County Board of Education meeting as the board took up the controversial plan to end the school system's long-standing student assignment policy.

Two additional protesters were later arrested as they chanted outside the packed meeting being held inside the district’s administration building. Duncan Edward Hardee, 21, of Ashville, and Rakhee Shirish Vasthali, 21, of Fayetteville, were each charged with one count of resisting, delaying or obstructing a law enforcement officer, Sughrue said.

All three were transported to the Wake County jail.

The protest came as the board prepared to cast a final vote on whether to move toward an assignment model in which students go to schools within a certain community zone. The decade-old assignment method now under fire buses students across the district to help achieve socio-economic diversity, allowing no school more than 40 percent of students receiving free- or reduced-price lunches.

The meeting got off to a rocky start Tuesday because of the board's decision to limit the number of people in attendance and the time for public comment.

“This is one more step in shutting down public opinion,” parent Judy Pidcock said.

About 80 people signed up to speak with many expressing concerns over the 2-minute limit.

“I think the new board, even though they claim they want transparency, and to include all people in the decision process, few of their actions have suggested such, and I think this is another example of that,” parent Heather Koonz said.

School board chairman Ron Margiotta said the time limit and ticket policy was designed to adhere to building fire codes. He said everyone who wanted to speak would be able to do so.

"If they've signed up on the speaker list, they'll be speaking even without a ticket," he said.

The debate over student assignment has heightened racial tensions between the board and the NAACP, which has accused the board of trying to resegregate schools.

Organizations, business leaders, parents and community members have also asked the board to reconsider the move.

Five of the school board's nine members have indicated that they support the community-based assignment plan and have insisted that they have no plans to segregate students.