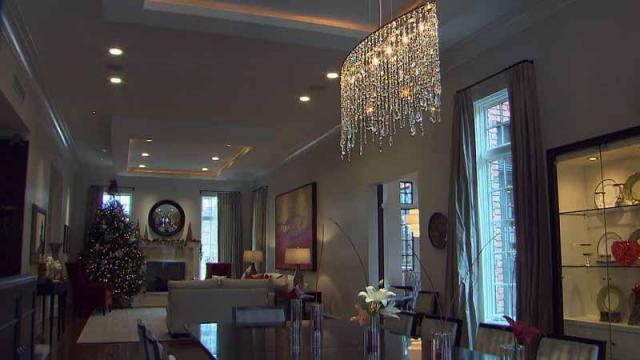 Raleigh, N.C. — The new $3.5 million house for North Carolina State University's chancellor is an investment in the school's plans to reach out to private donors, a university official said Tuesday.

The 8,500-square-foot mansion, which opened for media tours this week, is named The Point because of its location overlooking Lake Raleigh on N.C. State’s Centennial Campus and the leader's job of keeping the university "on point."

All of the wood detailing the home is from N.C. State's forest, and the oak floors were donated by the N.C. State Forestry Foundation. The floor plan was created by the school's College of Design team.

"This house is very much of North Carolina," Associate Vice Chancellor for Facilities Kevin MacNaughton said. "It really was much like an old barn-raising, in the old days, where people just came together to make it happen."

More than 70 individuals and businesses donated the money to build the new house, which contains a cozy family room, floor-to-ceiling bookcases and a state-of-the-art kitchen.

When asked how the university justifies spending that much money on a house when the school is cutting jobs and eliminating courses, MacNaughton said the house will be a hub for the university's efforts to build relationships with private donors.

"What we're seeing now is all the more important for us as a university to reach out to the private sector to help," he said.

The downstairs area will also serve as a place for the chancellor to host events, as often as once a week, and to build relationships. It can hold up to 200 people inside or on the back patio.

"It's really an investment to bring private dollars for the university," MacNaughton said.

The house was also built to be environmentally friendly. It uses geothermal heating and cooling and sustainable materials. Most of the lighting inside is from LEDs, which last longer than the typical incandescent or fluorescent bulbs.

The chancellor will reside upstairs in a 3,000-square-foot private living area.

Chancellor Randy Woodson and his wife moved in Oct. 28. The first fundraiser they hosted in the new home was Nov. 16. Since, they have hosted about a half-dozen fundraising events, officials said.

The old chancellor's residence, located at the intersection of Pullen Road and Hillsborough Street, was built in 1928. The residence will be the future home of the Gregg Museum of Art and Design.

The museum used to be located in the Talley Student Center but had to move out because of renovations at the center.