News and Notes About Science 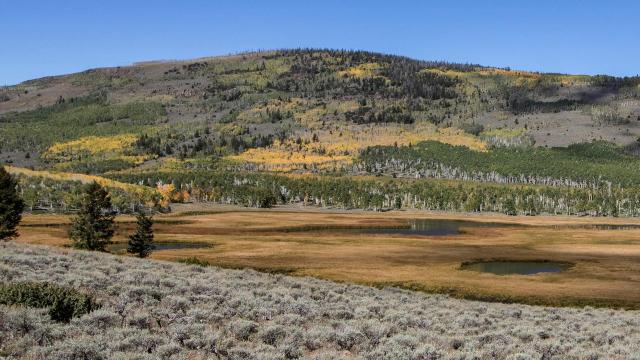 Pando, the Most Massive Organism on Earth, Is Shrinking

On 106 acres in Fishlake National Forest in Richfield, Utah, a 13-million-pound giant has been looming for thousands of years. But few people have ever heard of him.

This is “the Trembling Giant,” or Pando, from the Latin word for “I spread.” A single clone, and genetically male, he is the most massive organism on Earth. He is a forest of one: a grove of some 47,000 quivering aspen trees — Populus tremuloides — connected by a single root system, and all with the same DNA.

But this majestic behemoth may be more of a Goliath, suggests a study published recently in PLOS ONE. Threatened by herds of hungry animals and human encroachment, Pando is fighting a losing battle.

The study, consisting of recent ground surveys and an analysis of 72 years of aerial photographs, revealed that this unrealized natural treasure and keystone species — with hundreds of dependents — is shrinking. And without more careful management of the forest, and the mule deer and cattle that forage within him, the Trembling Giant will continue to dwindle.

“It’s been thriving for thousands of years, and now it’s coming apart on our watch,” said Paul Rogers, an ecologist at Utah State University who led the study.

Pando is constantly reproducing, which is essential to its resilience. Lacking genetic diversity, it relies on having trees of different sizes and ages. That way, if one layer or generation dies off, there’s another waiting to replace it.

But Pando’s critical demographics are out of balance. When Rogers and Darren McAvoy, a forestry colleague at Utah State, surveyed the forest, they found that older trees were dying, as expected, but that, on the whole, young ones weren’t replacing them.

Inadequate fencing, or the absence of it, seem to leave young patches of forest at the mercy of hungry mule deer, which are seeking refuge from hunters and increasing human activity. Foraging cattle, allowed into the park in the summer, are another factor in Pando’s shrinkage.

Aerial photos also revealed that Pando’s crown steadily thinned as human activity grew, especially in the last half century, with the addition of campgrounds, cabins and a telephone line, which drew animals that graze on forest leaves and shoots.

More fencing, culling of deer, and experimentation with the forest’s natural ecology ultimately might save Pando, Rogers said.

East Island, Remote Hawaiian Sliver of Sand, Is Largely Wiped Out by a Hurricane

First, the island was there. Then, it was mostly gone.

Before Hurricane Walaka swept through the central Pacific this month, East Island was captured in images as an 11-acre sliver of sand that stood out starkly from the turquoise ocean.

After the storm, government officials confirmed that the island, in the northwestern part of the Hawaiian archipelago, had been largely submerged by water, said Athline Clark of the National Oceanic and Atmospheric Administration. East Island is the second island to disappear in recent months from French Frigate Shoals, a crescent-shaped reef including many islets, Clark said.

Chip Fletcher, a climate scientist with the University of Hawaii who has been studying East Island’s natural history, said it comprises loose sand and gravel rather than solid rock.

Clark, the NOAA superintendent for the Papahanaumokuakea Marine National Monument, which includes the French Frigate Shoals, said no one immediately realized the island had largely disappeared because it is so remote. It is 750 miles northwest of Oahu, the island that is home to Honolulu.

The low-lying island, with its sandy composition, wasn’t much of a match for the storm in early October, which started off as a Category 5 hurricane and created large storm swells, Clark said.

Although experts cannot directly trace the shrinking of East Island to the effects of climate change, Clark said, it contributes to the strength and frequency of hurricanes like the one that overtook the island. Scientists say hurricanes will be stronger because warmer water provides more energy to feed them.

The shoals are also home to more than 200 endangered Hawaiian monk seals, he said. Only 1,400 of the species remain in the state.

It is possible that East Island will resurface and the turtles and seals will return to their seasonal homes. In images of the island after the storm, Littnan said he could already see that some monk seals had returned and hauled themselves onto the 150-foot-long patch of sand that remained.

Microplastics Find Their Way Into Your Gut, a Pilot Study Finds

Though it will take more than 1,000 years for most of these items to degrade, many will soon break apart into tiny shards known as microplastics, trillions of which have been showing up in the oceans, fish, tap water and even table salt.

Now, we can add one more microplastic repository to the list: the human gut.

In a pilot study with a small sample size, researchers looked for microplastics in stool samples of eight people from Finland, Italy, Japan, the Netherlands, Poland, Russia, the United Kingdom and Austria. To their surprise, every single sample tested positive for the presence of a variety of microplastics.

“This is the first study of its kind, so we did a pilot trial to see if there are any microplastics detectable at all,” said Philipp Schwabl, a gastroenterologist at the Medical University of Vienna and lead author of the study. “The results were astonishing.”

There are no certain health implications for their findings, and they hope to complete a broader study with the methods they have developed.

Microplastics — defined as pieces less than .02 inches long, roughly the size of a grain of rice — have become a major concern for environmental researchers during the past decade. Several studies have found high levels of microplastics in marine life, and last year, microplastics were detected in 83 percent of tap water samples around the world (the highest contamination rate belonged to the United States, where 94 percent of samples were contaminated).

Most microplastics are the unintended result of larger plastics breaking apart, and the United States, Canada and other countries have banned the use of tiny plastic beads in beauty products.

The new paper could provide support for marine biologists who have long warned of the dangers posed by microplastics in our oceans. But the paper suggests that microplastics are entering our bodies through other means, as well.

“The fact that so many different polymers were measured suggests a wide range of contamination sources,” said Stephanie Wright, an environmental health scientist at Kings College London who was not involved in the study. Two of the eight participants also said they did not consume seafood.

What lives a mile under the sea, has tentacles and fins and looks like a decapitated chicken ready for roasting?

The headless chicken monster, of course.

Yes, that is actually the name of a rare creature caught on film recently by researchers working in the Antarctic Ocean, about 4,000 kilometers (2,500 miles) off the southwest corner of Australia.

The “monster” — actually a sea cucumber that helps to filter organic matter on the ocean floor — has been caught on film only once before, last year in the Gulf of Mexico.

Floored by its unusual physique, scientists call it the headless chicken monster. (It is also known as the swimming sea cucumber, the Spanish dancer and by its scientific name — Enypniastes eximia.)

“It looks a bit like a chicken just before you put it in oven,” said Dirk Welsford, the program leader for the Australian Antarctic Division, who was among the researchers to spot the animal off the coast of Antarctica.

As part of a project to explore the effect of fishing on sensitive marine ecosystems, Welsford and his team attached specially designed cameras to fishing lines dropped to depths of 3 kilometers.

This particular project, Welsford said, was designed to explore the effects of commercial fishing on two species: the Antarctic toothfish and the Patagonian toothfish, better known to U.S. consumers as Chilean sea bass.

“We had no idea what it was,” Welsford said upon seeing footage of the creature for the first time.

Unlike most sea cucumbers, the headless chicken monster has fins, which allow it to swim upward to escape predators.

“From a research point of view, it’s very interesting, because no one has seen that species that far south before,” Welsford said, adding that discovering the animal near Antarctica could help scientists understand the species’ distribution, and how it might be affected by climate change.

While sightings of the sea cucumber go back to the late 1800s, scientists have “absolutely no idea” how many there are in the world’s oceans, Welsford said. It’s “an amazing reflection of how little we know about the deep ocean.”

Lavender’s Soothing Scent Could Be More Than Just Folk Medicine

People like lavender. We have been using this violet-capped herb since at least medieval times. It smells nice. But Google “lavender” and results hint at perhaps the real fuel for our obsession: “tranquility,” “calm,” “relaxation,” “soothing” and “serenity.” Lavender has purported healing powers for reducing stress and anxiety. But are these effects more than just folk medicine?

Yes, said Hideki Kashiwadani, a physiologist and neuroscientist at Kagoshima University in Japan — at least in mice.

“Many people take the effects of ‘odor’ with a grain of salt,” he said in an email. “But among the stories, some are true based on science.”

In a study published recently in the journal Frontiers in Behavioral Neuroscience, he and his colleagues found that sniffing linalool, an alcohol component of lavender odor, was kind of like popping a Valium. It worked on the same parts of a mouse’s brain, but without all the dizzying side effects. And it did not target parts of the brain directly from the bloodstream, as was thought. Relief from anxiety could be triggered just by inhaling through a healthy nose.

Their findings add to a growing body of research demonstrating anxiety-reducing qualities of lavender odors and suggest a new mechanism for how they work in the body. Kashiwadani believes this new insight is a key step in developing lavender-derived compounds like linalool for clinical use in humans.

In this study, researchers exposed mice to linalool vapor, wafting from filter paper inside a specially made chamber to see if the odor triggered relaxation. Mice on linalool were more open to exploring, indicating they were less anxious than normal mice. And they did not behave like they were drunk, as mice on benzodiazepines, a drug used to treat anxiety, or injected with linalool did.

But the linalool did not work when they blocked the mice’s ability to smell, or when they gave the mice a drug that blocks certain receptors in the brain. This suggested that to work, linalool tickled odor-sensitive neurons in the nose that send signals to just the right spots in the brain — the same ones triggered by Valium.

Though he has not tested it in humans, Kashiwadani suspects that linalool may also work on the brains of humans and other mammals, which have similar emotional circuitry.