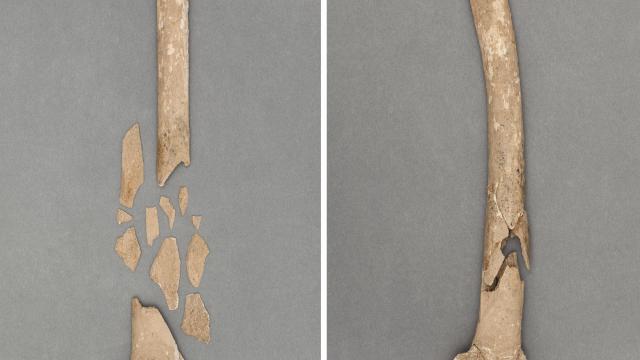 WASHINGTON — Side by side, in a shallow pit, two soldiers were hastily buried — and along with them, not flowers or mementos, but 11 arms and legs.

The limbs belonged to the fallen soldiers’ comrades, according to archaeologists, and were likely gathered from the amputation tables of deluged Union Army surgeons on a Civil War battlefield and buried there.

The remains, discovered in 2014 and excavated in 2015 from Virginia’s Manassas National Battlefield Park, mark the first-ever discovery of an intact surgeon’s “limb pit,” the National Park Service announced Wednesday. Experts say the finding is a pivotal development in understanding combat injuries and medical practices in wartime in the mid-19th century.

“So much of our focus has been on the battle itself. This provides insight into what happened after the battle, as surgeons rushed in to try to save lives,” said Brandon Bies, the superintendent of the battlefield park. “We’re looking directly at their decisions about who to save and who not to save. It’s unprecedented.”

Archaeologists uncovered two nearly complete sets of remains, 11 partial limbs and other artifacts. Experts believe the site was a field hospital during and after the Second Battle of Bull Run, which ended Aug. 30, 1862.

One skeleton, of a Caucasian male in his late 20s, still had a .577-caliber Enfield bullet — which was deployed almost exclusively by the Confederate Army during that battle — lodged sideways in his upper thighbone. Scientists believe the bullet slowed and rotated after passing through his cartridge box.

The second skeleton is of a male in his early 30s, believed to have died from rounds that struck his shoulder, groin and lower leg. Those remains were found with Union Army jacket buttons.

Isotope analyses revealed that during bone formation, both men had consumed food and water from Northern states.

“We use chemistry and forensics to tell their gender, their age, where they’re from, what happened. Just like you can read a book, we can read a skeleton,” said Douglas Owsley, a forensic anthropologist at the Smithsonian’s National Museum of Natural History.

Eleven smaller bone fragments excavated from the site have helped anthropologists understand surgical techniques in that time period. Many of the limbs had clean-cut cross-sections at the thigh, suggesting that the soldiers had sustained shin and foot wounds.

“It looks just like someone took a saw and cut across a tree branch,” Bies said.

In contrast, the injuries to the skeletons without amputations revealed the triage process.

“These surgeons had to work very quickly and make really difficult decisions without great supplies or resources,” said Katie Liming, a spokeswoman for the National Park Service. “These two almost-full sets of remains, buried fairly hastily, tell us that surgeons probably saw these men and said, ‘There’s nothing we can do.'”

Medical anthropologists say that Civil War remains are of particular interest because of the high number of casualties: At least 620,000 men died, many from sickness and infections. Antibiotics had not yet been developed, and amputation was often considered the most efficient way to save lives.

An estimated 50,000 limbs were amputated during the Civil War.

Dog tags were not yet used, according to Owsley, so the two soldiers’ remains could not be immediately identified. But researchers are still working to track down amputation records from the battle to match up the identities of the 11 amputees.

“It seems counterintuitive, but it is easier to identify partial limbs than full bodies,” Bies said. “Because of surgeons’ documentation, we can narrow down which troops were where, and look at possible identifications.”

The remains of the two soldiers formally underwent a dignified transfer to the Army on Tuesday. They will be buried in Arlington National Cemetery later this year.

Owsley, whose forensic work often focuses on elder and child abuse cases, said that the rich legacy of the battlefield remains made the historical research unexpectedly emotional.

“When you’re looking at shattered limbs, it takes you out of the overall concept of troop movements and into the personal stories of individual men,” he said. “We’re seeing the trauma of what was undoubtedly the worst moments of their lives.”