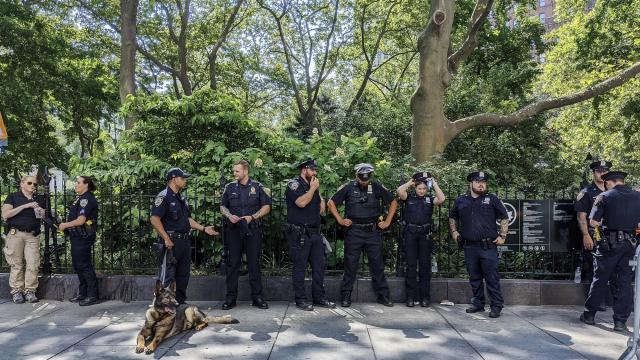 NEW YORK — New York City will require all municipal workers to be vaccinated against the coronavirus by the time schools reopen in mid-September or face weekly testing, Mayor Bill de Blasio announced Monday.

Last week, de Blasio announced a similar mandate for public health care workers — part of an effort to speed up vaccinations as the city faces a third wave of coronavirus cases driven by the spread of the delta variant.

The new requirement will apply to roughly 340,000 city workers, including teachers and police officers. The Sept. 13 deadline, when about 1 million students are set to return to classrooms, shows the importance of the reopening of schools for the city’s recovery and for de Blasio’s legacy.

Speaking at a morning news conference, de Blasio, a Democrat in his final year in office, also reiterated his call to private employers to set similar or stronger vaccine mandates for their workers.

“September is the pivot point of the recovery,” de Blasio said, “and so on Sept. 13, the first day of school, every single city employee will be expected to be either vaccinated or be tested weekly.”

“Don’t wait,” said Dr. Dave Chokshi, the city’s health commissioner, calling on all city employees to get vaccinated sooner than the September deadline. “We need stronger medicine to deal with delta, and that’s why we are taking these steps today.”

Whether all the city’s unions will be fully on board with the new mandate remains an open question. De Blasio said he was acting out of a sense of urgency, so city officials had not yet spoken with all of the municipal unions involved.

Those the city had spoken with, he and other city officials said, had reacted positively. The United Federation of Teachers signaled its approval Monday.

“This approach puts the emphasis on vaccination, but still allows for personal choice and provides additional safeguards through regular testing,” Alison Gendar, a spokeswoman for the teachers’ union, said in a statement.

The city’s largest public employees’ union, however, said Monday that there were still steps to be taken before it would consent to the testing requirement.

“Weekly testing is clearly subject to mandatory bargaining,” Henry Garrido, the executive director of the union, DC37, said in a statement. “New York City is a union town, and that cannot be ignored.”

Nearly 5 million New York City residents have received at least one dose of the vaccine, but the speed of inoculations has slowed. About 2 million adult New Yorkers are still unvaccinated. The number of virus cases has risen to more than 800 on average per day, more than triple the daily average in late June.

De Blasio was among the first big-city mayors to open schools for any in-person instruction last fall, and he announced in May that the city’s public schools would reopen for full-time live instruction in September, with no remote learning option. That made New York one of the first large school systems to declare a return to fully normal schooling for the coming academic year.

But parents and educators have expressed anxiety in recent weeks as the city’s average test-positivity rate has ticked up. Some parents say they are worried that the new school year will face major disruptions, as it did last year, and some teachers say they are concerned about returning to classrooms with cases rising.

The city’s education department estimates that around 60% of its employees are vaccinated, about the same rate as for employees at the city’s public hospitals. Vaccination rates appear to be lower in the police department, which has administered the vaccine to 43% of its members. The city’s fire department has roughly a 55% vaccination rate.

New York City’s vaccination rate as a whole is 65% for adults, better than the national average, but there are some neighborhoods where the rate is under 40%.

City health and hospital employees must be vaccinated or get tested weekly starting Aug. 2, the mayor announced. On Aug. 16, 45,000 city employees who work in congregate or residential settings, like homeless shelters and senior centers, will have to do the same. The mandate for the rest of city employees goes into effect on the first day of the school year. De Blasio said the city will reinforce a current rule requiring all unvaccinated employees to wear masks indoors at all times. The rule will now require people to show a one-time proof of vaccination to get out of that mask mandate.

The mayor also said the city is introducing a new “NYC COVID Safe” app to help employers keep track of vaccination status and weekly test results. New York state has an app, the Excelsior Pass, with a similar function.

De Blasio said the threat of the delta variant made the new steps by the city necessary.

“If someone is unvaccinated, unfortunately, they pose a threat to themselves, but they also have a greater chance of spreading the disease,” he said. “September is when the rubber hits the road, and this is when we have to make the difference.” This article originally appeared in The New York Times.