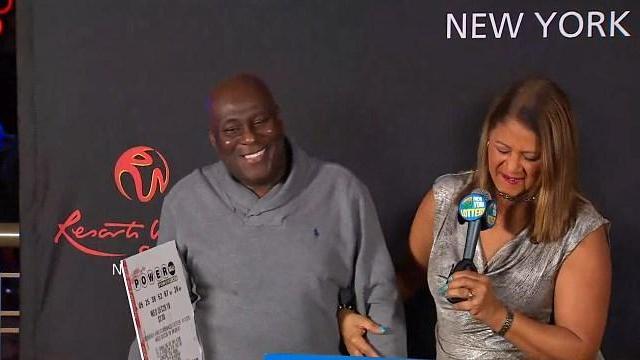 David Johnson, 56, of East New York, stepped forward on Friday with the winning ticket in hand in order to claim the huge payout. He accepted his winnings from the New York Lottery at Resorts World Casino in Queens.

When he realized he had won the jackpot, his world turned topsy turvy.

"I couldn't even eat. I'm hungry but my stomach is full. I want to sleep, but I don't want to sleep," he told the NBC local television affiliate in New York. "I'm still happy."

Johnson, a truck driver, said he was sick on the day after Christmas but dragged himself to his job as a truck driver so he could get holiday pay.

He told reporters that he decided to play Powerball that morning with the $5 he had in his pocket. Johnson said he was so ill that he did not watch the drawing and he didn't realize that he was holding the winning ticket until he returned to the gas station where he purchased it to check his numbers.

Johnson, who is originally from Jamaica, has chosen to take the lump sum cash payment, which amounts to $114 million after taxes.

He told WNBC-TV that he plans to take care of his family, buy a red Porsche and "a nice house."