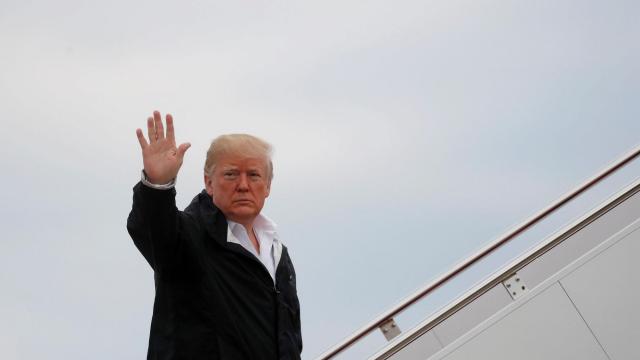 CNN — The Trump administration announced Tuesday it is replacing Obama-era fuel standards with a plan that calls for substantially lower annual increases -- performing what it called "the largest deregulatory initiative of this administration."

But it's a move that will have large environmental consequences and weaken former President Barack Obama's efforts to combat the climate crisis.

The finalized rule, prepared by the Environmental Protection Agency and the Department of Transportation, was unveiled Tuesday.

The administration's original proposal would have frozen the standards.

The change "reflects the realities of today's markets," the administration said, such as more interest in SUVs over smaller cars and automakers' current use of credits to meet their targets.

"Our final rule puts in place a sensible one national program that strikes the right regulatory balance that protects our environment, and sets reasonable targets for the auto industry," EPA Administrator Andrew Wheeler said. "This rule supports our economy, and the safety of American families."

According to The New York Times, which first reported on the details of the finalized rule, a recent draft plan showed that the new rule would allow for nearly a billion more tons of carbon dioxide released, as well as 80 billion more gallons of gasoline consumed.

An internal economic analysis found that while the new fuel economy standard would lower new car and truck prices, it would increase the amount consumers pay for gasoline and ultimately cost the US economy between $13 billion and $22 billion, the Times reported.

The administration said Tuesday that it believes the rule will cut the average cost of a new car by $1,000, resulting in more Americans replacing their older vehicles with newer vehicles that have more advanced safety features. That will result in fewer highway fatalities, it said.

Citing two people briefed on the rule, The Washington Post reported that the government's estimates found that more Americans will die as a result of the increased air pollution from the new standards compared to if the current standards were kept within a similar period.

"It will harm the air we breathe, stall progress in fighting the climate crisis and increase the cost of driving. The only winner from this action is the oil industry, which wants us stuck driving dirty gas guzzlers as long as possible," McCarthy said in a statement Tuesday.

She accused the Trump administration of not focusing on the global coronavirus pandemic but rather "undermining efforts to address another major health threat."

The rule, expected to be implemented in late spring, is likely to draw legal challenges from several states, according to the Times.

Shortly after taking office, the Trump administration had moved to reexamine those tougher Obama-era standards and end California's authority to set tougher emissions standards than the federal standards for itself and 12 other states.

For decades, California has had a waiver under the Clean Air Act that allows it to set its own emissions standards due to the state's history of intense air pollution. President Donald Trump announced in September he was revoking California's waiver, prompting the Golden State to lead a coalition of Democratic-controlled states and cities in suing the administration.

Fearing that drawn out litigation would lead to regulatory uncertainty, leading automakers asked the Trump administration in June to abandon their plans to scrap the emissions standards and restart talks with California about a compromise.