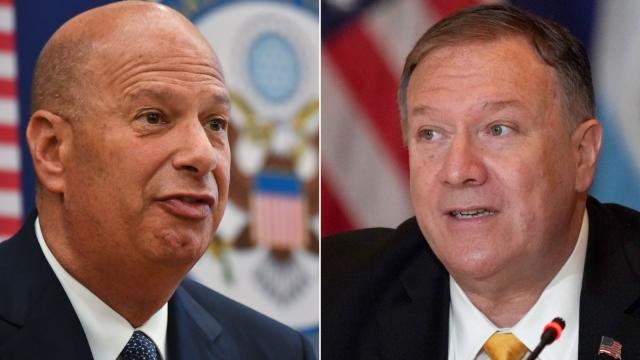 CNN — After devastating testimony from one of his own ambassadors, Secretary of State Mike Pompeo is now ensnared at the center of the impeachment probe he has denounced as "Washington noise."

Gordon Sondland, who was appointed by President Donald Trump to be US ambassador to the European Union, testified Wednesday that he had kept Pompeo "in the loop" about "activities" connected to the effort to get Ukraine to announce an investigation into Trump's main political rival.

Sondland's testimony directly tied Pompeo to the pressure campaign being carried out in Ukraine -- a campaign to which the secretary of state has largely avoided being publicly tied.

The revelations come at a sensitive time for Pompeo amid speculation he may be eyeing a run for the Senate from Kansas next year.

In a damning opening statement, Sondland testified that he had told Pompeo and other senior officials at the State Department and other government agencies about his pursuits in Ukraine and his dealings with the President's personal lawyer, Rudy Giuliani. Sondland said they had been specifically apprised of efforts to get Ukrainian President Volodymyr Zelensky to publicly announce investigations into Burisma -- a Ukrainian natural gas company that had hired Joe Biden's son Hunter -- and the 2016 election.

"Everyone was in the loop," Sondland said. "It was no secret."

Sondland said it was "correct" that Pompeo -- in the words of House Intelligence Chairman Adam Schiff -- had been "aware of this quid pro quo that, in order to get the White House meeting, there were going to have to be these investigations the President wanted." And in emails given to the committee as part of Sondland's opening statement, Pompeo appeared to approve of the envoy's efforts in Ukraine, with one early September email telling Sondland to keep "banging away."

'I didn't see a single thing today. I was working.'

Even as Sondland was testifying to Pompeo's more central role in the effort to pressure Ukraine, the secretary was in Brussels, Belgium, expressing disinterest.

Asked at a NATO news conference what he thought of Sondland's testimony, Pompeo said, "I didn't see a single thing today. I was working." As he often does when he feels pressured by a reporter's question, he threw in a dig, adding, "Sounds like you might not have been. I was in meetings all day."

"Any suggestion to the contrary is flat out false," she said. Pompeo himself said last month that he didn't see quid pro quo at play "in the decision-making process that (he) was a part of."

However, Pompeo was on the July 25 call between Trump and Zelensky in which Trump raised the idea, though Pompeo did not acknowledge he had been on the call until weeks later. He said on "Full Court Press with Greta Van Susteren" that she would "have to ask White House precisely what role (Giuliani) has with them," but Sondland testified Wednesday that Pompeo had instructed former Special Representative Kurt Volker to reach out to Giuliani as recently as late September.

Pompeo has denounced the House impeachment inquiry as "fundamentally unfair to the State Department." It was an argument Sondland flipped back on Wednesday. The envoy said that by not allowing him access to his departmental records, the State Department had made the process less fair.

"I have no doubt that a more fair, open and orderly process of allowing me to read the State Department records would have made this process more transparent," Sondland said.

Pompeo has been thrust into the same spotlight as more than half a dozen State Department officials who ultimately report to him. His department sought to prevent their testimonies: All but State Department counselor T. Ulrich Brechbuhl -- who defied his -- showed up under subpoena.

And as the career diplomats caught up the controversy have come under attack from Trump, Pompeo has declined to publicly defend them, causing morale in the department to plummet and anger at the secretary to grow.

Pompeo "could be doing more to defend the diplomats he allegedly leads," a State Department official told CNN. "There is a sense he's hanging career diplomats out to dry. ... To try to diminish these diplomats is a disgrace."

"To my mind," this official added, echoing several others with whom CNN spoke, "he's demonstrating a lack of courage, a lack of integrity, that will haunt him in his future political endeavors."