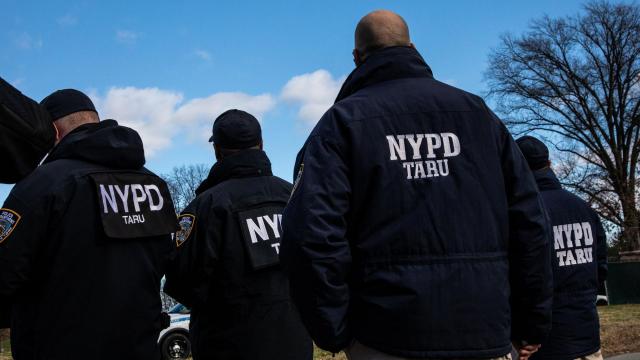 NEW YORK — Law-enforcement agencies across the country have adopted using aerial drones to map crime scenes, monitor large events and aid search-and-rescue operations. But the highflying devices have also triggered backlash over fears they will be used to spy on law-abiding citizens.

The New York Police Department on Tuesday unveiled plans to deploy 14 of the unmanned flyers and to train 29 officers to operate them, opening an intense debate about whether an agency previously criticized for illegally surveilling citizens should possess such powerful technology.

Senior police officials said the drones would be used for monitoring giant crowds, investigating hazardous waste spills, handling hostage situations and reaching remote areas in crime scenes, among other tasks. They will not be used for routine police patrols, unlawful surveillance or to enforce traffic laws, the officials said. Nor will they be equipped with weapons.

“Drone technology will give our cops and their incident commanders an opportunity to see what they’re getting into before they go into harm’s way,” Chief of Department Terence A. Monahan said. “For this reason alone, it would be negligent for us not to use this technology.”

He added, “Let me be clear: NYPD drones will not be used for warrantless surveillance.”

But lawyers specializing in civil liberty cases who reviewed the department’s proposed drone policy said it did not go far enough in preventing the police from misusing the devices. Advocates for police reform expressed alarm about the department’s growing surveillance capacity. Aside from drones, the police have thousands of cameras in public places, license plate readers and devices that can siphon information from cellphones by mimicking cellphone towers.

Christopher Dunn, the associate legal director of the New York Civil Liberties Union, said police officials rejected recommendations that would have required the department to regularly disclose how often they use the drones and why.

The department’s policy also allows the use of drones for any “public safety” reason the Chief of Department deems necessary. That leaves room for the police to use the drones however they want, with no public oversight, Dunn said.

Other critics, including public defenders and elected officials, have also raised concerns the drones might be used to spy on black and Hispanic neighborhoods that have long been targets of aggressive policing practices. These detractors also have raised the possibility the video from the drones could also be exploited by the Trump administration to target immigrants.

Dan Gettinger, the co-director of the Center for the Study of the Drone at Bard College, said privacy concerns are likely to grow as the technology becomes more widespread and the capabilities of the machines increase. More than 900 law enforcement agencies currently use them, he said.

“Drones are a very dynamic platform,” he said. “They’re one thing today, but the technology is going to evolve and sensors are going to become more sophisticated.”

The use of drones by police departments soared after the federal government eased licensing requirements in 2016. The Las Vegas police have used them to monitor New Year’s Eve festivities on The Strip, and the police in Cleveland have used them to pursue suspects.

But protests surfaced over their use in Los Angeles, and in Seattle, where public pressure forced the police to ground their drones in 2013.

The New York State Police have 18 drones, which troopers use for tasks like finding missing people and projecting flood depths. “It’s easier to use a drone than to launch one of our helicopters, and it’s less expensive,” Beau Duffy, a spokesman, said. Police officials in New York City said they were considering using drones in 2014, and last year the department ordered three for testing. By June, the department had purchased 14. The program cost about $480,000.

Many police departments have started drone programs without the blessing of local authorities, purchasing the devices with federal funds, private donations or through loopholes in procurement processes. The New York Police Department, however, consulted with local elected leaders, among others, on a policy for using drones before they were deployed, officials said.

Officials demonstrated the devices at a closed-door meeting with a few City Council members on Sept. 27 at Police Headquarters, then met with the civil liberty lawyers to discuss the policy on Oct. 5.

Donovan Richards, a Democrat and the chairman of the City Council’s Committee on Public Safety, said the police were right to seek outside input before launching the drones.

Although Richards said he understood the potential value of the flying devices, he said he would seek to fast-track legislation requiring the police to report on how often the department uses drones and why, and establishing privacy safeguards.

“What we want to avoid is ‘mission creep,’ where you start with the use of drones for traffic and before you know it, it’s being used for surveillance,” Richards said.

But some critics said the secrecy surrounding the program has fueled skepticism of the agency’s willingness to operate transparently.

“Drones are serious surveillance tools that can be weaponized,” said Joo-Hyun Kang, the director of Communities United for Police Reform, an umbrella coalition. The lack of public input and oversight in developing the drones program “reflects a dangerous anti-democratic pattern of the de Blasio administration and the NYPD that disregards the perspectives of communities most impacted by police abuses,” she added. The Police Department bought the drones between April and June from DJI Technology, a company based in China. Eleven of the devices are Mavic Pro quadcopters, which measure less than two feet in diameter. Two of them are M210 RTK quadcopters, which are larger, weather-resistant models equipped with powerful camera lenses capable of thermal and three-dimensional imaging. The police also bought a DJI Inspire quadcopter for training pilots.

Each drone is flown by a two-person team from the Technical Assistance Response Unit: One officer mans the controls, while the second monitors the device while it is in flight.

At a demonstration at Fort Totten in Queens, police drone pilots demonstrated several scenarios in which the devices could be helpful. One drone was used to provide an overview of a scene meant to resemble a fatal car crash. In the second scenario, two drones were flown to take pictures of a mock hazardous materials leak involving a van.

The larger drone provided thermal imaging of the smoking car while the smaller drone flew close enough to get a vantage on the vehicle’s open doors. The final drill involved using a drone to find a person posing as a lost child in a city park.