More than 1 million people worldwide have died of Covid-19 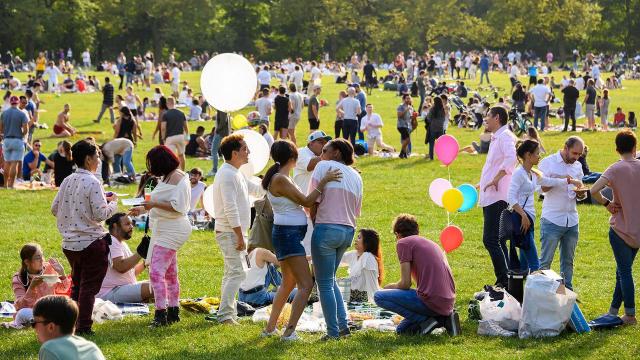 CNN — The world reached a somber milestone in the coronavirus pandemic Monday: More than a million people worldwide have died from Covid-19, according to Johns Hopkins University's data.

The United States accounts for more than 20% of global deaths and has the highest fatality count, having so far recorded 205,131 deaths.

The first coronavirus-related death recorded was in the Chinese city of Wuhan on January 9. Worldwide, half a million deaths were reported more than 24 weeks later, on June 28. It took just a little over 13 weeks to double the figure.

One million dead: How Covid-10 tore us apart

Johns Hopkins' tally shows the United States, Brazil, India and Mexico account for more than 50% of the deaths worldwide.

In the US, Covid-19 cases continue to climb, with 21 states reporting more new cases this past week compared to the previous week, according to data from Johns Hopkins.

But in many states, "it's not only that the number of infections keeps on going up. It's also that the test positivity rates are trending in the wrong direction," emergency medicine physician Dr. Leana Wen said Monday.

"That means that not only do we have increasing infections in these states, we also don't have nearly enough testing."

Cases 'grow at an alarming rate' in parts of NYC

For the first time since early June, New York state reported more than 1,000 new cases Saturday -- prompting Gov. Andrew Cuomo to warn that this virus "remains a force to be reckoned with throughout the country."

"It's vital that New Yorkers continue to practice the basic behaviors that drive our ability to fight Covid-19 as we move into the fall and flu season," Cuomo said. "Wearing masks, socially distancing and washing hands make a critical difference."

In New York City, Covid-19 cases "continue to grow at an alarming rate" in eight neighborhoods in the city, outpacing the citywide average by 3.7 times over the past 14 days, the city health department said Monday.

In response, the department said it will deploy 11 mobile testing units this week to areas with high positivity rates and triple the capacity of "express" testing sites in some areas.

New York state was once the US epicenter of this pandemic, but the rates of new cases, hospitalizations and deaths have plummeted in recent months.

The decreases came after New York shut down and mandated masks in public early. The state also ramped up testing capabilities on its own when testing was scarce nationwide.

That's especially true as public schools in New York City reopen to students this week. But officials could decide to close schools, limit gatherings and issue fines for not wearing masks.

Nationwide, more than 7.1 million people have been infected with coronavirus, and more than 204,000 have died, according to Johns Hopkins data.

And health experts warn the US could see an explosion of new infections this fall and winter if people get more lax about precautions and spend more time indoors.

Children account for about 10% of coronavirus cases, but people should still pay attention to virus spread in that age group, Dr. Anthony Fauci said Monday.

"Children do get infected. And we'd better be careful about just dismissing infection in children," Fauci told CNN's Brian Stelter, adding "It is unclear the degree to which they transmit" the virus.

Some studies suggest they don't do it as "efficiently" as adults, said Fauci, who is director of the National Institute of Allergy and Infectious Diseases and a member of the White House Coronavirus Task Force.

"But it's an evolving situation," and "you have got to keep an open mind when it comes to an issue like what the role of children is in transmission."

The US Centers for Disease Control and Prevention published a report Monday that said Covid-19 among adolescents ages 12 to 17 was almost double the cases in children ages 5 to 11.

The report included data on 277,285 laboratory-confirmed cases among school-aged children in the United States from March 1 to September 19. Among those cases, 37% were in children ages 5 to 11 and 63% were in adolescents.

The data might underestimate the true incidence of disease among school-age children, as testing was often prioritized for people with symptoms, and those without may not have been tested, the researchers noted.

Authorities crack down on large gatherings

Weddings and other social events have spawned outbreaks nationwide, with deaths linked to a wedding in Maine and the Sturgis Motorcyle Rally in South Dakota.

Now authorities are stepping up efforts to end gatherings where the virus can easily spread.

Both the owner and manager of the venue face multiple misdemeanor charges.

In Maryland, a man was sentenced to a year in prison Friday after holding two large parties in late March in violation of the state's social distancing rules, which banned gatherings of more than 10 people, Gov. Larry Hogan's office said.

The man started arguing after he was told to disband his first party of about 50 people, the state attorney's office said. Five days later, he held a second party of more than 50 people that he refused to end, saying they had a right to congregate.