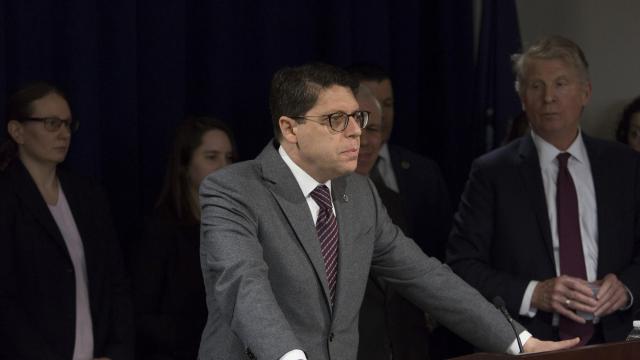 NEW YORK — It began like a run-of-the-mill bureaucratic flare-up, a small power struggle early this year between officials in Mayor Bill de Blasio’s administration and New York City’s investigations commissioner over a little-known office that handled inquiries into the school system.

By Monday, it had ballooned into a public-relations crisis for the mayor, exposing him to lurid allegations that he or his administration had tried to cover up embarrassing inquiries, accused the commissioner of being disloyal and ultimately dismissed him in the interest of damage control.

De Blasio on Friday took the rare step of firing the investigations commissioner, Mark G. Peters, whose role scrutinizing all areas of city government normally comes with a broad measure of independence.

It did not take long for Peters to fire back. He released an acid-ink letter Monday, accusing the mayor of carrying out a vendetta, and acting out of fear over what he might dig up next.

Peters described receiving an angry call from the mayor in January 2017, in which he said that de Blasio asked him not to release a report critical of the Administration for Children’s Services.

“When I informed the mayor that DOI was obligated to make its findings public, he yelled at me, accused me of trying to bring his administration ‘down,’ and then informed me he was ‘going to hang up now before I say something I shouldn’t,’ ” Peters wrote.

The fracas over the investigations commissioner capped a challenging week for de Blasio, who faced criticism over the city’s handling of Thursday’s snowstorm, a backlash from his fellow progressives over the deal to bring Amazon to Queens and a judge’s rejection of a deal that would have appointed a federal monitor to oversee the troubled New York City Housing Authority.

At an afternoon news conference, de Blasio energetically pushed back on Peters’ allegations.

“False, it’s just false,” de Blasio said when asked if he had telephoned Peters to pressure him to withhold a report. “I’m sure I had conversations with Mr. Peters and I’m sure I had disagreements, but that characterization is false.”

He added, “I will only say, broadly, there have been conversations about reports, about accuracy, about specific recommendations, all sorts of things, but never a conversation where there was an effort to inhibit the actions of DOI on a specific report.”

De Blasio could not keep from letting his irritation show, as he was peppered with questions about Peters. “I’m sorry he has delusions of grandeur in thinking that everything revolves around him,” the mayor said.

If the nasty back-and-forth seemed unusually personal, there is a good reason: de Blasio and Peters became friends at least as far back as the 1990s, when they both served on a local school board in the liberal political circles of Park Slope, Brooklyn.

De Blasio’s political career took off, and by 2013 he was running for mayor, with Peters as his campaign treasurer. Once elected, de Blasio named Peters to lead the Department of Investigation. The choice brought criticism: Could Peters have the independence to subject his friend’s administration to real scrutiny?

Peters seemed to answer the question with a series of highly critical reports, exposing shortcomings and mistakes on de Blasio’s watch, including failures to inspect for lead paint at the Housing Authority and lapses at the Administration for Children’s Services.

But while de Blasio and his aides may have chafed at the criticism, there was little they could do; firing the investigator who exposed his failings was politically impractical.

But then Peters overreached. Early this year, he moved to exert his control over the quasi-independent schools commissioner’s office. When the Education Department pushed back, Peters persisted, ultimately firing the schools investigator, Anastasia Coleman, when she questioned his authority.

Coleman filed a whistleblower complaint and an independent investigator was hired to look into the allegations. The investigator’s report was completed last month, revealing a pattern of abuse of power and abusive behavior by Peters.

From that moment the clock was ticking: Would de Blasio use the investigation to unseat his nemesis?

He did so Friday, eliciting relatively muted objections from the City Council, which had previously defended Peters, and would have to approve his successor.

But the storm broke anew Monday, with Peters’ letter.

Although Peters had previously apologized for his conduct regarding the whistleblower, he disputed the factual findings of the investigation, and asserted that the mayor had other reasons for dismissing him.

“The context of the mayor’s interactions over the past several years with DOI, combined with certain ongoing investigations about which the mayor and his senior staff are very much aware, must cast doubt upon the mayor’s true motives,” Peters wrote in the letter, which was addressed to City Council Speaker Corey Johnson and the chairman of the council’s committee on oversight and investigations, Ritchie Torres. He wrote that pressure placed on him by the mayor’s office amounted to “an attempt to punish and intimidate DOI for its past work.”

Peters said that, aside from the 2017 call from the mayor, senior City Hall officials had on several occasions urged him not to release reports critical of the administration. He also expressed concern that ongoing investigations might be quashed by a new commissioner appointed by de Blasio.

Torres, the city councilman, issued a statement saying that Peters’ letter “reveals a pattern of interference with DOI investigations and intimidation against DOI officials that borders on the unethical and should be illegal.”

Some of the instances where Peters said City Hall officials sought to pressure him involved top mayoral officials. Peters said that in April 2017 a senior official asked him to “forbear” from issuing a report detailing how the correction commissioner, Joseph Ponte, had misused a city vehicle assigned to him, saying that it would be embarrassing to Ponte.

Peters released the report, and he wrote in his letter Monday that “I subsequently had multiple conversations with people who informed me that the mayor and his senior staff were ‘really angry,’ felt I should be more ‘loyal’ and now wondered if I was ‘still a friend.'”

He also said that an official had asked him not to release the report on lead inspections at the Housing Authority. He released it anyway.

Peters also wrote that the Police Department had on multiple occasions refused to cooperate with his investigations. He described a meeting in 2016 in which “a senior NYPD official conspicuously displayed his gun,” adding that the official later told another person that he had intended to “intimidate the DOI officials” at the meeting.

Taken together, Peters said those incidents demonstrated that de Blasio and his staff “believe that I owe a duty of loyalty to the mayor rather than to the city as a whole.”

“Unfortunately this is an individual who did some very inappropriate things,” de Blasio said. “There was an independent investigation by a respected investigator, who he hand-picked.”

He added, “I am exercising my authority under the charter to make sure there’s a change in that office and we bring in someone new and independent and strong.” Peters also expressed concern that several investigations “that could implicate the mayor and/or his senior appointees” could be quashed. Those include an investigation into whether City Hall interfered for political reasons in a review of the educational quality at several Jewish religious schools; further investigations into “unsafe conditions” at the Housing Authority; and a review of “sexual assault investigations at the NYPD.”

Rory Lancman, a city councilman from Queens, voiced the thoughts of many New Yorkers over the unseemly tit for tat at the top of New York City government.

“This gossipy back and forth,” Lancman wrote on Twitter, “debases both DOI and the mayor’s office.”