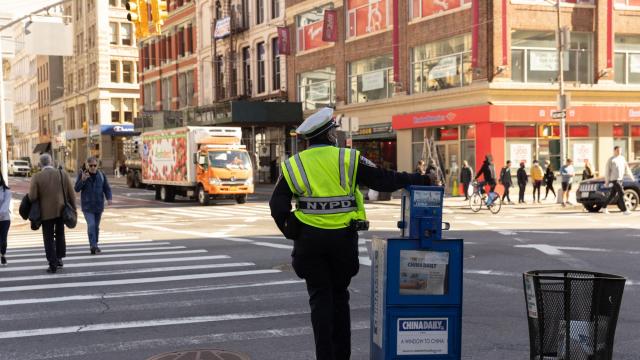 NEW YORK — New York City took one of its most aggressive steps yet to increase vaccination rates in a city that was once the epicenter of the pandemic, requiring almost every member of the nation’s largest municipal workforce to get vaccinated by the end of the month or lose their paychecks.

The new mandate by Mayor Bill de Blasio, following similar requirements for teachers and health care workers that led to a surge in vaccinations, is intended to persuade thousands of city workers who have resisted getting the shot to do so before winter.

At least 46,000 police officers, firefighters and other city workers have not yet received the vaccine, and the mandate could lead to staffing shortages at a time when the city is still recovering from the pandemic, when shootings rose.

“We need to save lives, and we do it with vaccinations,” de Blasio, a Democrat with less than three months left in office, said at a news conference. “My goal is to end the COVID era once and for all. It can be done, but only if we keep pressing on.”

New York is one of the first major U.S. cities to require vaccination for its entire municipal workforce without a testing option. San Francisco set a similar vaccine mandate for its 35,000 city workers, which goes into effect Nov. 1, and Los Angeles and Chicago have been pushing public workers to get vaccinated. Among states, Washington and Massachusetts are requiring state employees to be fully vaccinated.

Starting Nov. 1, New York City workers must have received at least one dose of a coronavirus vaccine and can no longer submit to regular testing as an alternative. The mandate applies to roughly 160,000 city employees. The city has more than 300,000 workers, but nearly half were already required to be vaccinated.

Those who get their first doses at city-run vaccination sites between now and Oct. 29 will receive an extra $500 in their paychecks.

Unions representing police officers and other public workers in New York City vowed to fight the mandate and encouraged de Blasio to “slow down” and negotiate. The president of the main police union, the Police Benevolent Association, said the union would “proceed with legal action to protect our members’ rights.” Law enforcement officers across the country have tended to be more hesitant about getting vaccinated, often with the support of their unions. In Chicago, the head of the police union told officers to ignore a city order to report their vaccination status, leading the department to put 21 officers on “no pay status” this week for not complying.

New York City’s police commissioner, Dermot F. Shea, has supported a vaccine mandate for officers, although he acknowledged that it could strain the department if some officers choose to leave rather than get vaccinated. De Blasio said Wednesday that he did not believe that a large number of police officers would quit over vaccinations.

“Do you want to get paid or not?” de Blasio said at a news conference. “Well, the vast, vast majority of people in public service need that paycheck.”

De Blasio, who is considering a run for governor next year, has taken an aggressive position on vaccinations — setting mandates, offering a $100 incentive and requiring the shots to dine indoors and to visit movie theaters. The vaccination rate in New York City has steadily climbed: More than 84% of adults have received one dose. But low vaccination rates have persisted at some city agencies. Only 51% of workers at the Department of Correction have received one dose; the Police Department has a rate of 70%. The Fire and Sanitation departments are hovering around 60%.

De Blasio said that the vaccine mandate was necessary because many public workers have close contact with residents. “We need to reassure all New Yorkers that if you’re working with a public employee, they’re vaccinated,” he said.

Eric Adams, the Democratic nominee for mayor who is expected to win the Nov. 2 general election, said Wednesday that he supports the mandate.

“It is essential we get all of our public employees vaccinated, especially those who interact directly with the public, and I support a mandate,” Adams said in a statement. “But we must also work with our unions to make sure there is buy-in from our workers to ensure compliance.”

Adams has said that he wants to go a step further and set a vaccine mandate for public school students.

Under the mayor’s directive, any worker who does not get vaccinated by the deadline will be placed on unpaid leave. Medical and religious exemptions will be allowed “for a small number of employees,” a city official said.

Uniformed correction officers will initially be excluded from the new mandate because of the staffing crisis at the Rikers Island jail complex, but they will be required to get vaccinated by Dec. 1, the mayor said. Some officials objected to the delay because detainees and corrections officers have died after contracting COVID-19 while at Rikers.

Harry Nespoli, president of the union that represents sanitation workers, said the mandate was disrespectful and could leave the department short-staffed when the first snowstorm hits this winter. He predicted that some workers could retire early or find other work rather than get vaccinated.

He added that garbage pickup and street clearing required little interaction with the public. “We don’t come in contact with the public, we don’t hug the public,” Nespoli said. “We start at 5 o’clock in the morning. No one’s there.”

Gregory Floyd, president of Teamsters Local 237, which represents approximately 7,400 employees in the public housing system, where just 6 in 10 workers are vaccinated, said he believes many workers will get the shot in the coming days.

“I think with the $500, and needing employment, they will have a conversation with their physician and get vaccinated,” Floyd said.

Floyd said that rampant misinformation about the vaccine had left many of his members fearful.

“They don’t know what the vaccine is going to do to them. They’re afraid of it,” he said.

The new mandate, reported first by The New York Post, builds on a July announcement that all city employees would be required to show proof of vaccination or submit to weekly testing. More than 70% of city workers affected by the new mandate have already received at least one dose of the vaccine, the mayor’s office said. But vaccination rates vary among city agencies. The Department of Correction has the lowest vaccination rate; the next lowest rate is at the city’s Housing Authority, where 59% of employees are vaccinated. The Fire Department, emergency medical services and sanitation workers have similar vaccination rates among their employees; only about 60% have received at least one dose.

After Department of Education employees were required to get vaccinated, the vaccination rate for teachers rose from 87% to more than 96%.

There have been more than a dozen legal challenges to vaccination mandates in New York City and New York state, but judges have so far broadly upheld the right of the government to mandate vaccination. Statewide, health care workers who applied for religious exemptions from the vaccine mandate have won a preliminary injunction that allows many of them to keep working for now, even though religious exemptions were not permitted in the state’s vaccination order for health care workers.

Health care workers who were not vaccinated by the deadline and did not have an exemption have either been put on leave or fired by their private employers. Education employees have one year of unpaid leave, with health insurance, to get vaccinated in an arbitration ruling worked out with the city.

The city will begin working out similar agreements dictating what will happen to unvaccinated employees with each union representing city workers in a process known as “impact bargaining,” a city spokesperson said. City Hall had hoped that its earlier policy, which allowed unvaccinated city workers to get tested weekly for the coronavirus, would raise rates enough to avert a stricter mandate. But that did not turn out to be the case.

Since the start of weekly testing just over a month ago, only 2% of additional Fire Department workers decided to get vaccinated. An additional 15% to 16% of police and sanitation workers got vaccinated in that time period, indicating the earlier mandate may have had more success in those agencies. But even after those improvements, the rates remained well below de Blasio’s targets.