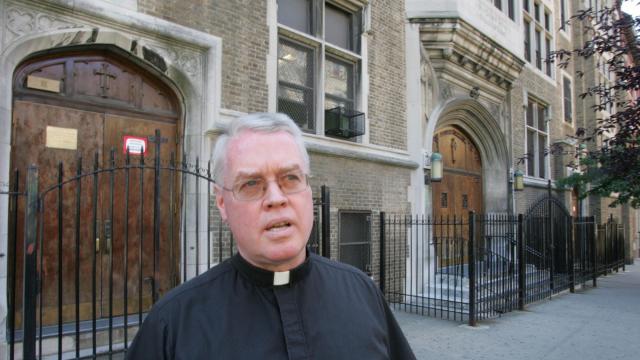 An auxiliary Catholic bishop in New York, John Jenik, has been accused of sexual abuse and removed from his public ministry, Catholic officials said, the latest scandal to hit an institution already reeling from revelations of inappropriate behavior by its clergy around the globe.

“Although the alleged incidents occurred decades ago, the Lay Review Board has concluded that the evidence is sufficient to find the allegation credible and substantiated,” Cardinal Timothy M. Dolan, the archbishop of New York, said in a statement Wednesday.

The allegation involves an inappropriate relationship with a teenage boy in the 1980s, according to the accuser and his lawyer. Jenik, 74, denied the allegation, which will now be investigated by the Vatican.

In an Oct. 29 letter to his parishioners, he wrote: “I continue to steadfastly deny that I have ever abused anyone at any time. Therefore I will ask the Vatican, which has ultimate jurisdiction over such cases to review the matter, with the hope of ultimately proving my innocence.”

The removal of Jenik from his public duties is a milestone in the widening abuse scandal in the United States. He is the first active bishop to be accused in the wave of abuse revelations that began in June with the news that one of the nation’s top prelates, retired Cardinal Theodore E. McCarrick, had assaulted an altar boy in the 1970s.

In September, the attorney general in New York announced a statewide civil investigation into allegations of sexual abuse and cover up in Roman Catholic dioceses. More than a dozen states have opened investigations since the release in August of a grand jury report documenting abuse and cover up by more than 300 priests in Pennsylvania.

Last week, federal investigators instructed all dioceses in the nation to preserve all church documents related to sex abuse because of a continuing inquiry by the Justice Department.

The alleged victim of Jenik, Michael J. Meenan, 52, said Wednesday that he first told the archdiocese about the inappropriate relationship in January, and that he was interviewed last week by the Lay Review Board, which examines allegations of sexual abuse in the Archdiocese of New York.

“There must be a price to pay for this,” Meenan said. “Because people should not have to go through this.”

Meenan said he was also sexually abused by a religion teacher at his Jesuit high school, Fordham Prep. The abuse took place in 1984 at a sleepover party in Westchester County, just north of New York City. He said he woke up to find the teacher performing oral sex on him.

In 2016, Fordham Prep found the allegation credible, and Meenan received a settlement in that case. He said that he first reported that encounter in the fall of 1984, but that the allegation was rebuffed.

Meenan, who served as class president, went on to Brown University and later worked as an educator and a journalist, including as a freelancer for The New York Times.

He said Jenik befriended him when he was about 13 at Our Lady of Refuge church in the Bronx, where Jenik has served since 1978. The priest made a name for himself with urban renewal projects in the borough. In 2014, Pope Francis named him an auxiliary bishop, one of several who assist the archbishop of New York in carrying out his duties.

Jenik had met the young Meenan through confession, where he gained his trust. He then became close with his family, Meenan said. Within months, the priest was taking him out for dinner and movies and serving him alcohol.

According to Meenan, he also began taking the boy for overnight stays at a house he owned in Tivoli, New York. Often it was just the two of them, and there would be more drinking. Meenan said his parents consented to the arrangement because they implicitly trusted the priest.

“I was conditioned to do this,” he said. “I was doing exactly what I was supposed to do.”

During those visits, Meenan said, he and the priest would usually sleep in separate beds. But he said that on one occasion, when Meenan was 15, the two shared a bed. Meenan described the priest — who had been drinking — rubbing and patting the sides of his body over the blankets. Meenan said he was frozen with terror as it happened.

“The weirdest, creepiest part was how he was putting my mouth next to his mouth, as if he was taking my breath,” he said.

Meenan said the inappropriate relationship occurred from about 1980 to 1986. Then, Meenan recalled, the priest told him he no longer had time for him. He estimated that he had stayed overnight at the Tivoli house roughly 70 times.

Meenan said the psychological impact of the inappropriate relationship had been enormous.

“He was thinking, ‘I can do whatever I want and get away with it,'” Meenan said. “I can no longer live with this rage. It has got to go.” Mitchell Garabedian, Meenan’s lawyer, said his client was applying for compensation for the abuse claim through an independent reconciliation and compensation program, which is run by the diocese for claims that no longer fall within New York state’s statute of limitations.

“The decision to remove Bishop Jenik,” Garabedian said, “is just another indication of how far up the power structure of the Catholic Church sexual inappropriateness exists.”

As pastor at Our Lady of Refuge on East 196th Street, Jenik spent more than three decades preaching in an area of the Bronx once notorious for drug dealing. He held outdoor masses in the back of a bus in an effort to reach those who might otherwise never wander inside the beige brick-fronted church with large double doors for a traditional service.

On Wednesday afternoon, parents picking their children up from a Catholic elementary school attached to the church were shocked to hear there had been an abuse allegation against a pastor they considered an institution in the community.

“This is something heavy to have thrown at me,” said Marcus Watson, 34, who turned to his two daughters and asked them to name the priest who usually officiated at their Mass for the school. “Father Jenik,” one of them said.

Watson’s face turned solemn. He worriedly whispered the news to his wife, who swept their daughters out of the church courtyard.