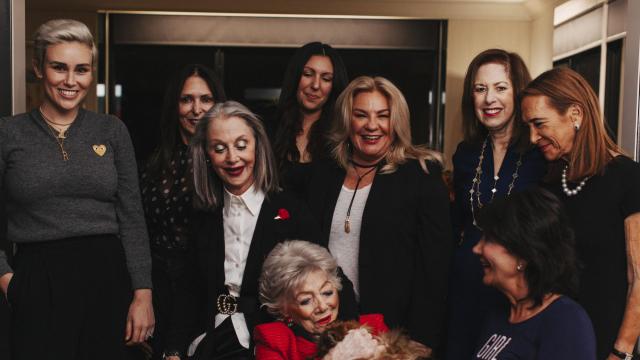 Susan Good was sitting with a group of women in her home in Palm Springs, California, when one of them began lamenting the difficulties of aging. But it wasn’t the usual script about aches, pains and skyrocketing cholesterol levels. “She said that she felt invisible,” recalled Good, who is in her 70s. The speaker felt generally silenced. Unseen. As if she had nothing to contribute to the world.

This shocked Good. “Invisible” was the last word she would have used to describe this woman. “She was very popular with a great personality,” she said. But then the other women in the room echoed the same feelings.

“These were all women who had college degrees, were married or had a significant other, were well traveled and led very nice lifestyles, but every one of them felt invisible,” she said. “They felt invisible when they saw themselves in the mirror. They didn’t feel pretty any longer. Nobody was looking at them.”

The word continued to haunt her, and she wondered if she could help address this prevalent feeling. So in 2015 Good, whose nickname is “Honey,” created a website for women 50 and older, HoneyGood.com, which offers advice on everything from pedicures to the stock market to grandparenting (she has two children, one stepchild and 26 grandchildren; a book, “Stories for my Grandchild,” comes out in February).

But rather than keep her initiative strictly online, Good in September started Moxie!: a free private social network on her website where women could bond. The idea was for them to share their stories, concerns and triumphs not just with people in their same age group, but across generations.

At her monthly Moxie! group in Palm Springs, now in its third year, women in their 60s munch on cookies and sip coffee while mingling with women in their 80s. At a recent gathering in Chicago, where she lives half the year, guests ranged from 29 to 93.

“We talk about money issues, blended families, widowhood, invisibility,” Good said. “We talk about problems between mothers and daughters. The only rule I have is that nothing leaves my home.”

Good’s Moxie! group is one of a handful of informal, intergenerational women’s gatherings that have started recently in cities around the country. Distinct from the Lean In circles started by Sheryl Sandberg, which tended to focus on career, these groups are filling a necessary void: As a January 2018 J. Walter Thompson trend report of women 53 to 72 noted, women in this age group are usually overlooked or ignored.

In most other countries, young and old freely mix together, with several generations often living under one roof. But in the United States, that mostly happens in the workplace. Even so, millennials and baby boomers tend to stick with their same-aged cohort, rarely associating out of the office.

This is a limited way of socializing that cross-generational groups seek to expand. “A lot of people think if they’re mothers they can only be friends with mothers; if they’re single they can only hang out with single people,” said Shasta Nelson, 41, author of “Friendtimacy,” a book about deepening friendships that was published in 2016. “But research suggests that it doesn’t matter what commonality we have, only that we find a couple of commonalities. If I say, ‘I’m in my 40s and I only want to meet people in my 40s,’ it’s as much of a predictor of friendship as saying I can only be friends with people born in September or who like Madonna or who have my name.”

According to Nelson, only three things are necessary for a relationship to flourish: positivity (it has to feel good); consistency (you have to be in touch on a regular basis); and vulnerability (you have to feel safe with each other). None of them has to do with age.

“A friendship is any relationship where two people both people feel seen in a safe and satisfying way,” she said.

Ten years ago, Nelson created GirlFriend Circles, a kind of match.com for women to meet online and take it offline if they choose. She later started Travel Circles, which helps women of all ages take trips to meet other women around the world.

Angela Wilkinson, 48, a self-described “suburban housewife in Middle America” (in this case, Marion, Iowa), went to Greece, Italy, Rwanda and Peru with Nelson. With two sons now in their early 20s, one of whom has special needs, Wilkinson said she always felt isolated at home, and unable to meet new people.

“It’s hard to make friends as an adult,” she said. “I didn’t have friends who were older or younger.”

On her trips with Nelson, she became close with two women: one of whom is 13 years older than she is, another who is 14 years younger. They have remained in touch and have even taken other vacations together.

“What helped bridge the age gap with friendship is when you’re in a new situation or uncomfortable in some way — it’s just a great equalizer,” Wilkinson said. “We’re all in the same boat. On these trips everyone’s on these new situations. The age goes out the window.” Though Lean In is less spoken of these days, some intergenerational women’s gatherings are focused on professional advancements. Erica Keswin, 50, is a workplace strategist who started the Spaghetti Project, a monthly gathering in her Manhattan home of like-minded individuals two years ago. (The name came from a study she read by Kevin Kniffin, a professor at Cornell, who found that firefighters who ate meals together had higher performance levels than those who dined solo.) Some are free; others have a nominal cost.

Keswin models her salons, which do include pasta, after today’s average white-collar workplace, where multiple generations share one roof and are forced to interact. “Groups of people need to come together in an intentional way,” she said. “It’s good for us personally and in business. Regardless of where it is and who’s there, good things happen when people connect.”

Spaghetti Project attendees are invited not by age but by a common denominator, usually work related: They’re all in the food industry, say, or obsessed with conscious capitalism, or trying to transition out of freelance writing.

“When I curate these events I want diversity of thought — race, gender, age — and not just people from the same schools or background,” said Keswin, the author of “Bring Your Human to Work,” about encouraging personal authenticity in the office. “We want people at different stages of their career.”

That’s also the thinking behind Generation Women, a monthly reading series in New York and Sydney, Australia, where women from multiple generations read short stories and essays loosely centered around a theme.

The series came about after a conversation its founder, novelist Georgia Clark, 38, had with her mother about “disappearing” in later life. “She said that as she had gotten older people looked right through her,” Clark said. “If we’re walking down the street together they’ll just look at me, and if she’s alone it’s as if she’s not there.”

“I was aware of ageism as an issue, but because it was something my mother said it really made it personal and I got mad,” she continued. “I wanted to do something about it. I wanted to create a storytelling event where women of all ages could come together and feel comfortable and heard. We make a lot of space in our society for teens through 30s, for their experiences and journeys and point of views, but we don’t make space for women in their 60s, 70s and 80s, who are still going through changes and evolution and whose perspectives are so much greater.”

Some participants find these sorts of intergenerational gatherings comforting in a divisive political climate. Younger women are seeking solace in the assurance of older women, who have lived through political uncertainty or wartime, that everything will be OK. Older women appreciate the passion and drive of younger women in case everything isn’t.

“I’m blown away by their emotional sills and self-awareness,” said Christine Mulvey, 60, a writer in Nevada City, California, who attends annual Honey Root Embodiment Gathering intergenerational retreats (no relation to Honey Good). “Things I came to in my 40s and 50s, young women are coming to so much earlier. I find permission to be themselves and to be creative in them that just thrills me. I’m delighted by it. Their hunger for real connection and depth, their passion for the world.”

“And then there’s a darker side to that,” Mulvey said. “The passion that I see in them can slip into a kind of despair. There’s something about being older and having been through a number of cycles from different eras that kind of holds the despair at bay, and also calls it into a sense of how important it is that they show up and engage.”

At HoneyRoot’s Embodiment Gathering (yes, the name is a little woo-wooey, but it is California, after all), which lasts four days and costs $495 to $750, depending on financial means, certain women are given “elder” status, which means they’re treated as valued members whose experiences are honored and respected. They, in turn, welcome the “youngers” into adulthood. (Each woman determines for herself when she’s an “elder” — for most woman it’s when they are postmenopausal.)

“I think our younger members have an understanding that strangely not everyone does, that one day they will be older women and that we’re all responsible for creating a society that honors older women,” said Devorah Bry, 40, the founder of HoneyRoot, who is a dancer and couple’s therapist in Nevada City.

“The dominant culture tells you that when you get to a certain age you can’t be included anymore,” Bry said. “It’s cool to see certain people who say, ‘I don’t want you to see my age, I want you to see my age and spirit.’ Then other people who are in the same room who want you to acknowledge that ‘I’m older and living in a different type of body now, I want to be honored that I have life experience now.’ It’s really about paying attention. We’re all going to get to the end of our life.”

Jessica Arnold, 30, started going to HoneyRoot two years ago. She was feeling adrift, and worried about the country.

“I really felt I needed more connection with older people, especially politically — I feel really lost,” Arnold said. “But I also have this sense that history repeats itself and that it’s a continuum that has happened throughout history. I need the guidance and remembrance that times like these have happened before and to keep your eyes set on something greater.”