Cary, N.C. — Wegmans has just announced that the new Wegmans Food Market in West Cary will be opening on Aug. 2 at 7 a.m.

The 103,000 square-foot store is located on Davis Drive and Airport Boulevard in Wake county. It will include the company’s signature European open-air market look and feel and will include The Burger Bar, a family-friendly, casual restaurant counter that serves burgers, sandwiches, sides, and beer and wine by the glass.

Part-time openings include a variety of positions across every department in the store, including customer service and culinary roles. The West Cary store will employ a total of 450 people.

Applications are accepted online at https://jobs.wegmans.com/west-cary or you can call 984-960-5580 for more information. Interviews are conducted by appointment only and applications are not accepted at the store construction site.

“I’ve heard people say Wegmans is the Disneyland of grocery stores, and I couldn’t agree more,” said Store Manager Katie Duchnowski. “While we set high standards for the products and services we offer, the people are what set us apart. Everyone you work with becomes part of your family and is there to help you succeed. This is a company with endless opportunities, and at 16 years old, I never thought I’d be moving to North Carolina to open a new store.”

At 16 years old, Katie Duchnowski got the call she was waiting for and eagerly accepted a part-time job at the Erie Wegmans in Pennsylvania. When she finished high school, Duchnowski continued her career with Wegmans by participating in the Management Intern Program while attending Edinboro University. During this time, she gained experience working in various departments and realized this is what she wanted to do long term. After graduating, Duchnowski worked as a Front End manager, restaurant foods manager, and service manager before becoming a store manager in 2012.

Tom Schwarzweller began cooking at age five and years later, went on to graduate from the Culinary Institute of America. A former executive chef at the Radisson Hotel at Cross Keys in Maryland, he joined Wegmans in 2005 as executive chef at the Hunt Valley store. Since then, the North Carolina native has led the kitchens at multiple Maryland and Virginia stores, and is now ready to be back home, leading the West Cary culinary team. Schwarzweller and his team will provide the restaurant-quality prepared foods Wegmans is known for, with self-serve food bars, subs, pizza, fresh sushi and more.

Sherry Deuyour joined Wegmans in 2009 as a part-time cashier. After graduating from Ithaca College, she moved to Rochester where she went full time with the company. In 2017, Deuyour was given the opportunity to help open the Northborough Wegmans in Massachusetts. While there, Deuyour held a variety of positions including cheese team leader, café manager, and merchandising area manager. As a Duke basketball fan, Deuyour is excited to begin her new role at West Cary managing the front end, service desk, maintenance, accounting office, and Helping Hands. Deuyour will also oversee local community giving, carrying out Wegmans’ commitment to make a difference in every community it serves.

Wegmans Food Markets, Inc. is a 101-store supermarket chain with stores in New York, Pennsylvania, New Jersey, Virginia, Maryland, Massachusetts, and North Carolina. The family company, recognized as an industry leader and innovator, celebrated its 100th anniversary in 2016. Wegmans has been named one of the ‘100 Best Companies to Work For’ by FORTUNE magazine for 23 consecutive years, ranking #3 in 2020. The company was also ranked #1 for corporate reputation among the 100 most visible companies, according to the 2019 Harris Poll Reputation Quotient® study. 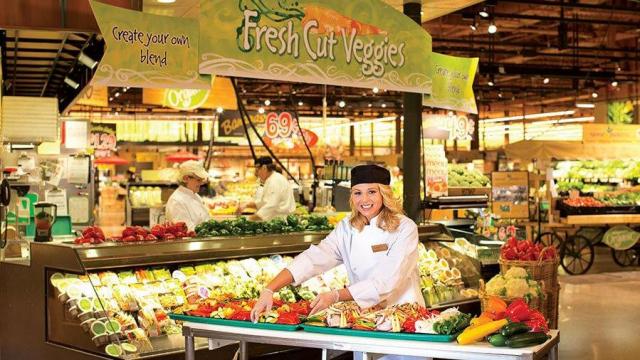