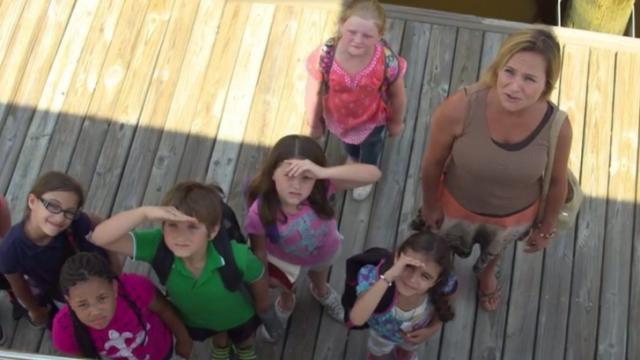 Tillis, a Republican, is challenging Hagan, a Democrat, in a campaign that is heavily laced with state legislative politics. Hagan is a former Senate budget writer, and Tillis serves as the leader of the state House.

Senate Majority PAC is an independent expenditure group allied with Democrats and closely associated with U.S. Senate Majority Leader Harry Reid. The group plans to spend $800,000 to run the new ad over the next 13 days, according to a spokesman.

The ad features a number of claims about the North Carolina General Assembly's record of funding education, including the state's relatively low rank in funding teacher salaries and cuts to teaching positions.

The ad contrasts those cuts against a 2013 tax bill that allowed purchasers of big boats to keep a sales tax break. The punchline of the commercial features a teacher leading a group of students up to a yacht, whose owner asks what she is doing.

"Our classroom is too small. I thought we could use your yacht," the teacher replies.

The ad comes as House and Senate legislative leaders are trying to negotiate a final 2014-15 state budget. A primary feature of that debate is by how much the state will raise teacher salaries and how those salaries will be paid.

"Thom Tillis is trying to use political smoke and mirrors to convince voters that he isn't as reckless as his record would show," said Ty Mastdorf, campaign director for Senate Majority PAC.