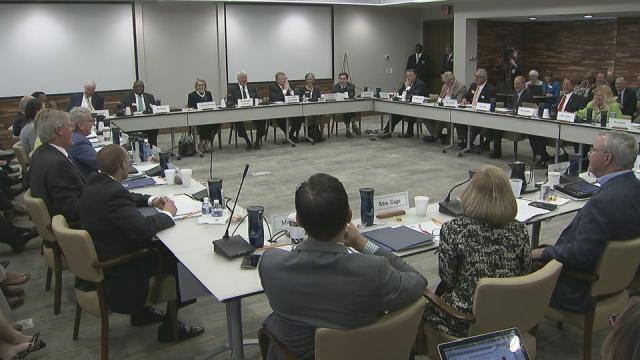 Chapel Hill, N.C. — The University of North Carolina system's Board of Governors named Harry Smith its new chairman Thursday, opening a new chapter for a board that has taken a more activist role in the system in recent years.

Smith was the only candidate for the position, despite the recent revelation that he }pressed a student housing deal he could have profited from at East Carolina University and despite a a lawsuit filed in April accusing him and another Board of Governors member of trying to steer a North Carolina Central University housing contract to a business partner.

After Thursday's vote, several of Smith's fellow board members praised his hands-on approach at the system, which oversees North Carolina's 16 public universities and the North Carolina School of Science and Mathematics, a residential high school for academically gifted students.

Outgoing Chairman Lou Bissette said Smith has "an incredible mind" and has "the best interests of the universities at heart." Smith himself has acknowledged the poor optics of conversations he had with ECU officials in 2016 about an apartment complex he wanted them to buy or to lease from him and his partners.

He has said he learned from that process and that he was transparent about his efforts, which are documented at length in emails released by the university through a public records request.

Smith has said he'll eventually be vindicated in a lawsuit filed by N.C. Central's former finance director that accuses Smith, board member Darrell Allison and Chancellor Johnson Akinleye of steering a housing project toward a firm that Smith has invested with in the past, the same firm that would have been involved in the deal at ECU.

The ECU deal never went through, and the company was eliminated in the first round of talks at N.C. Central, officials have said.

Board of Governors member Bob Rucho said Thursday that, if Smith made anyone uncomfortable at these universities, then perhaps they're the ones with something to hide. Rucho, a former state senator, said Smith has done a good job of digging into campus finances, finding money no one knew existed.

"He's running it like it needs to be run," Rucho said.

Smith has said repeatedly that, as vice chairman of the board, he's put a lot of time into helping universities right their financial ships, with particular efforts focused on Elizabeth City State University and other historically black schools in North Carolina.

Bissette will serve as chairman for about another month, then Smith will serve a two-year term. Also Thursday, Randy Ramsey was elected as the new vice chairman, and Pearl Burris-Floyd was re-elected as secretary.

None had competition. Whatever campaigning took place has been over for some time, and all three were voted in unanimously as a block with no discussion.

"Sounds like Venezuela or something," Bissette joked as he announced the unopposed slate.

"Thank you, I think," Smith said after the vote.

"I appreciate nobody speaking out," he said, then slapped Bissette on the back.