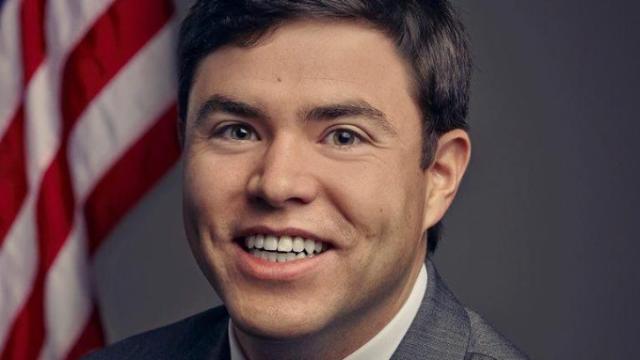 Raleigh, N.C. — This has been a week of firsts for newly elected State Superintendent of Public Instruction Mark Johnson.

On Monday, he was officially sworn in to his first statewide elected office while his 3½-year-old daughter stood nearby, holding his grandmother's Bible. On Tuesday, he began his first day at the North Carolina Department of Public Instruction, where he faced a "whirlwind of activity" and nonstop meetings.

On Wednesday, he encountered another first – his first State Board of Education meeting, where he was sitting among board members who are at odds with him over who should wield the most power over North Carolina public schools.

The board filed suit last week to challenge a new state law that gives Johnson more flexibility in managing the state's education budget, more authority to dismiss senior level employees, control of the Office of Charter Schools and the ability to choose the leader of the new Achievement School District, which will oversee some of the lowest-performing schools in the state. Those powers have been under the State Board of Education's control.

A Superior Court judge issued a temporary restraining order last week to prevent the new law from taking effect. The order remains in effect for 10 days, and another hearing is scheduled for Jan. 6 to determine whether an injunction should be put in place to block the law until courts determine whether it's constitutional.

The law has set up a power struggle between Johnson and the state board over who should be in charge.

Johnson supports the new law and said the changes "will help usher in an era of greater transparency" and create a system of state oversight of public schools "similar to how local superintendents and their respective boards of education work together across North Carolina."

State Board Chairman Bill Cobey has criticized the law, saying it threatens the working relationship between the board and Johnson. Cobey told WRAL News that he met with Johnson in November and spoke with him by phone several times prior to the law being passed. He did not say what they discussed.

WRAL News contacted Johnson this week to find out how the transition is going at the state education department, where he is replacing June Atkinson, the nation's longest-serving state superintendent and the first woman in North Carolina to hold the job.

An advisor and chairman of Johnson’s transition committee emailed back to say that Johnson has been very busy.

"His first day at DPI has been a whirlwind of activity," advisor Jonathan Felts wrote. "The folks at DPI from top to bottom have been very welcoming and have gone out of their way to ensure Mark can hit the ground running."