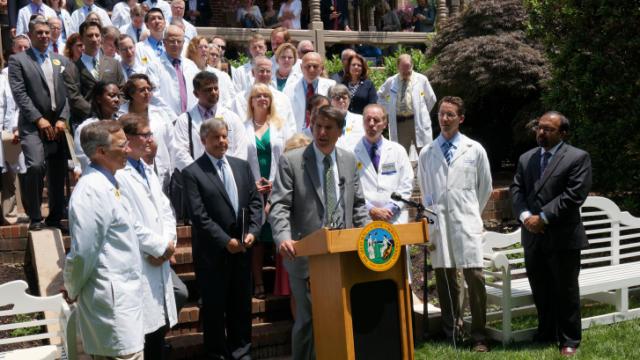 Raleigh, N.C. — When Senate leaders rolled out the latest in a series of long-term Medicaid reform efforts Wednesday morning, they opted for a bill that would create a new agency to oversee the state health insurance system for the poor and disabled, snubbing a House-drafted plan that had been endorsed by Gov. Pat McCrory.

The measure, which drew fire from health care providers almost as soon as it was unveiled in the Senate Rules Committee, looks similar to the draft Medicaid reform plan senators included in their budget earlier this year, although it does make some adjustments that bow to elements of the House proposal.

However, on the big points, the Senate sticks to its guns, calling for a move to "full capitation" – industry speak for placing all of the risk for an especially expensive patient on doctors and insurers – by 2016, four years ahead of the House timeline.

"The plans out there simple don't do enough to control the cost growth in Medicaid," Sen. Ralph Hise, R-Mitchell, said, noting that lawmakers have had to cope with $2 billion in Medicaid cost overruns during the past four years.

Medicaid is a health insurance system that, in North Carolina, covers pregnant women, children and those with certain disabilities. The state spends $14 billion a year on the program, although $10 billion of that comes from the federal government.

The state system has has problems over the years, as cited by Hise, but some of those cost overruns were of the legislature's making. Lawmakers have frequently demanded changes to the program in order to save money, but the federal government has to approve those changes, leaving the state in a situation where budget writers count on savings from moves that aren't approved for years, if at all.

In this plan, senators anticipate making the transition over two years. The existing Medicaid agency in the Department of Health and Human Services would be instructed to keep the current system running and cooperate with the new Medicaid agency until the new system is ready to take over care. The new agency would be run by a seven-member board appointed by the governor and the legislature.

Both of those structural changes, Hise said, were made to mimic the corporate structure of successful companies, but they drew "concerns" from McCrory's administration, which has objected both to moving Medicaid from his purview as well as the proliferation of new boards.

"We would ask that it be studied," Adam Sholar, legislative liaison for DHHS, told the committee.

Sholar also said the department had concerns about how the bill would handle mental health. Currently, Medicaid-paid mental health services are provided through regional local management entities, or LMEs. This bill would prod those entities to either become providers that deal with physical health as well or force partnerships between LMEs and other health care providers.

"We're concerned, particularly on the mental health side, about the disrupting affect some of these changes could have," Sholar said.

McCrory spokesman Josh Ellis said the governor is "pleased that the Senate is moving on Medicaid reform." But, he added, "the Senate’s proposed bureaucratic reorganization is impractical and undermines the progress that has been made during the past year and a half. This legislative overreach also raises some serious constitutional issues and should not be raised in the closing days of the short session.”

When the House put forward its Medicaid reform plan, it called for the creation of accountable care organizations, or ACOs, an industry term that refers to groups formed by doctors, hospitals and other health care providers to manage patients. The concept is similar to one being used to manage some patients in the Medicare system for the elderly.

Senators would allow for the creation of ACOs but would also allow managed care organizations, which are essentially insurance companies that control costs by emphasizing member wellness and clamping down on what they deem to be unnecessary costs.

"We're not sure why they keep going to this tired idea," Gregory Griggs, executive vice president of the North Carolina Academy of Family Physicians, said of the Senate push to clear the way for managed care companies.

Larger insurers, Griggs said, would siphon profits out of the state while interfering with doctors' ability to treat patients. The result, he said, are states such as Florida, where only 50 to 60 percent of family doctors take Medicaid patients, while in North Carolina that number is over 90 percent.

He pointed out that the Senate bill requires that members appointed to the seven-member board have not received payments from or been paid by a company that received payments from North Carolina's Medicaid system in the past year. This would exclude doctors, hospital executives and many academics from serving on the board but allow corporate executives form out of state to play a part in designing the new Medicaid payment rules.

"What we're pushing for are individuals who don't have a vested interest," Hise said.

Robert Seligson, chief executive of the North Carolina Medical Society, said the plan would deprive "North Carolina of valuable input from the physician community, which offers unsurpassed clinical experience and a deep commitment to improving our state’s Medicaid system without hurting patients. The Senate preference for corporate managed care disregards the hard, productive work over the past year to craft a consensus Medicaid reform plan that provides more financial certainty for the state without compromising patient care. It goes against the direction recommended by the medical experts in Gov. McCrory’s administration."

Cody Hand, a lobbyist with the North Carolina Hospitals Association, urged senators to give locally formed accountable care organizations to have a shot at controlling costs before allowing in out-of-state managed care companies.

"It's disappointing that providers would say these kinds of things because it's simply not accurate," said Jeff Myers, chief executive of the Medicaid Health Plans of America, the nation's largest group of Medicaid managed care plans.

Myers said that profits wouldn't be leaving the state. Rather, managed care plans would help the state, and therefore taxpayers, save money on Medicaid spending. Neither doctors nor patients would have to worry about such companies restricting services, he said.

"When a state contracts with a managed care plan, the state had pretty rigid requirements," he said.

Managed care companies come with the added benefit of "integrated program integrity systems" that cut down on mistaken billings and substantial financial backing, so they're able to roll with the financial punches.

The Senate Rules Committee is scheduled to have a second discussion on the new Medicaid bill Thursday. It would then move on to the Senate floor.

House members are unlikely to accept the Senate proposal as is, although there was talk of potential compromise on Wednesday.

"There's a legitimate argument that Medicaid may need to move out of the Department of Health and Human Services," Rep. Justin Burr, R-Stanley, said, referencing recommendations made by prior studies of DHHS, which is one of the biggest – and at times most unwieldy – in state government. "They certainly have a point there."

As for allowing managed care companies into the mix, Burr was more circumspect.

"Whatever we do, we'd certainly want to make sure our local North Carolina folks have first bite at the apple," Burr said.