New rules will allow e-scooters to stay in Raleigh 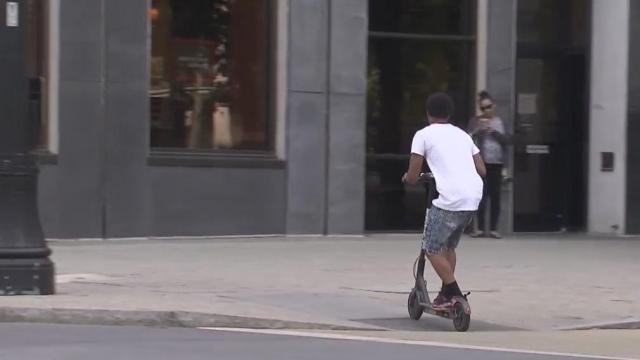 Raleigh, N.C. — Raleigh officials have developed a plan to allow and regulate the e-scooters that began popping up across the city over the summer.

Bird scooters and Lime scooters began popping up in July, and officials scrambled to determine how to regulate them as EMS officials responded to dozens of accidents involving the scooters.

According to an agreement from the Raleigh City Council to allow the scooters, Bird and Lime, as well as any other subsequent companies, will be held responsible for any damage caused by the scooters, including property damage, personal injury or death, even in cases of user negligence. The companies would be required to maintain sufficient funding to reimburse the city for any property repair or maintenance costs.

The companies would also be responsible for any legal fees or civil penalties related to the scooters, according to the document.

Before riding an e-scooter, users have to download an app and agree to certain rules, including wearing a helmet, being 18 years old or older and not riding on the sidewalk. The city agreement says e-scooter companies would have to continue to adhere to these rules, but did not specify how they would be enforced.

Dangerous or fun? Wake EMS has responded to 22 e-scooter crashes since July

Law enforcement officials have previously said that users typically ignore the rules and they do not have the resources to police those who refuse to wear helmets or ride on the sidewalk.

In order to keep the scooters off the sidewalk, city officials said each vehicle must have the phrase “no riding on sidewalks” printed on the handlebars. The companies would be required to inform users on correct parking protocol, to ensure scooters are not left on sidewalks, and the city must remove all improperly parked scooters by 10 p.m. each day.

Some feathers ruffled as Bird scooters land in Raleigh

Scooters could be returned for use at 5 a.m. each morning, officials said.

Each scooter must also be outfitted with GPS technology that would allow it to be tracked at all times, the agreement states.

All scooters currently require an app for usage, but city officials said that Bird and Lime have 30 days from the acceptance of the agreement to develop a plan to make them available to people without a smart phone or bank account. In addition, 20 percent of all scooters must be maintained in “communities of concern,” as designated by city officials.

Because the scooters will be used on city property, all companies will be required to pay a $300 encroachment fee per scooter as well as a $70 administrative fee for each scooter.

The agreement allows the scooters to remain operational in the city until July 31. During the course of the contract, city officials must be kept up-to-date on usage, including number of users, number of trips taken on scooters and the number of scooters that were vandalized or repaired.

According to the agreement, no company can operate more than 500 scooters in the city. As of last month, Bird had a fleet of more than 1,100 scooters across the city.