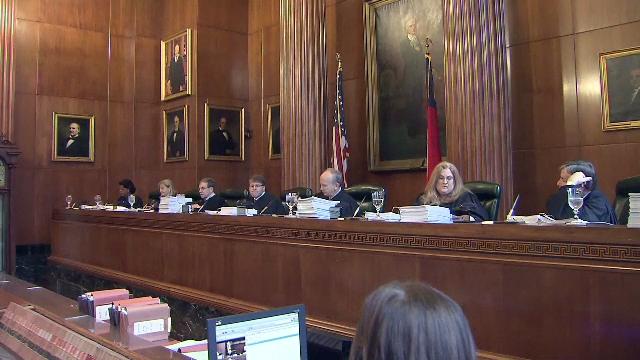 Raleigh, N.C. — The North Carolina Supreme Court would be able to call retired justices back to serve on a case-by-case basis in order to avoid potential deadlocks under a rule the court adopted on Nov. 8.

That rule would come into play when a Supreme Court justice declines to hear a case because of a conflict of interest or is disqualified by his or her colleagues.

While Article IV of the state constitution gives the court broad discretion in running the state's justice system, some legal scholars question whether it can make such temporary appointments.

"The ability to literally appoint somebody to serve a function as a judge or justice, unless there is some very clear constitutional or legislative authorization, is questionable," said Michael Gerhardt, a law professor and expert in constitutional law at the University of North Carolina at Chapel Hill. "It strikes me as a problem under the state constitution."

"This is a very problematic order where the court's jurisdiction is exceptionally unclear," Glazier said, citing both his opinion and analysis by other lawyers with whom he had consulted.

"It ought to be seriously reviewed," he said, adding that any case decided by such a replacement justice would "invite statutory and constitutional challenges."

Current law allows for the appointment of a former justice to replace one who "is temporarily unable to perform all of the duties of his office," but that authority applies to justices who are unavailable for long stretches due to illness or injury.

The new Supreme Court rule proposes an ad hoc replacement for a justice who is otherwise working and hearing cases.

Although ties are rare on the court, they are not unheard of. When there is a deadlock, the ruling of the lower court that last heard the case stands, but it doesn't set a precedent, which means the decision won't guide how future cases are decided.

"Historically, the Supreme Court has faced situations where the members of the Court have been equally divided and therefore unable to authoritatively resolve issues of importance to the people and the law of the state," Gladwell wrote on behalf of Martin.

There have been three recent cases of Supreme Court deadlocks, the highest-profile of which involved how Supreme Court justices are elected. That now-defunct law would have allowed Supreme Court justices to stand for re-election in retention elections, contests in which voters decide whether or not to keep the incumbent rather than choosing between two candidates. Such elections are less taxing on incumbents than more traditional elections.

Justice Bob Edmunds, who had been slated to run in the first of the retention elections, recused himself from the case when lawyers argued it last spring. That left an evenly divided court split 3-3 over how to handle the case. Therefore, a decision authored by a panel of three Superior Court judges rejecting the law stood. After the ensuing campaign, Edmunds lost his seat to Wake County Superior Court Judge Michael Morgan last week.

Had the new rule been in place then, Martin would have been able to call on a former associate justice to sit with the remaining six justices to hear the case and avoid the tie.

Although the court is putatively nonpartisan, the party affiliations of its members are well known, and parties frequently campaign on behalf of would-be jurists. The Edmunds-Morgan race flipped the balance of the court; Morgan gives registered Democrats a 4-3 advantage on the court.

It's unclear what the full universe of potential fill-in jurists would be. Court officials say that no list has yet been established.

The order issued Nov. 8 says they would be selected based on a "neutral rotation" of eligible retired justices. Presumably that would include Democrats such as Franklin Freeman, who served in Gov. Mike Easley's administration, and Republicans such as Bob Orr, who is now in private practice but has handled legal work for Gov. Pat McCrory, as well as Edmunds, once he retires. Less clear is whether justices who have passed the state's mandatory retirement age, such as former Chief Justice Sarah Parker, would be able to serve.

"It's good that they would use a rotating panel and that it would be neutrally done," said Michael Curtis, a law professor and constitutional expert at Wake Forest University.

Such a rotation, he said, avoids the appearance of favoring one ideological side over the other.

Asked whether the Supreme Court has the authority to institute such a system, Curtis said, "I don't know. I can't answer that question."

It's unclear how such a rule might be challenged. The state Supreme Court is supposed to be the top arbiter of the state law and North Carolina's constitution.

Glazier says it's possible the court could be granted the authority by lawmakers – that authority doesn't exist yet – and they would still face questions about constitutional requirements that justices be elected.

UNC's Gerhardt says the mechanism is unusual compared with other state supreme courts and raises number of legal questions.

"At the federal level, it would be crazy," he said. "I'm not sure it's much better on the state level."