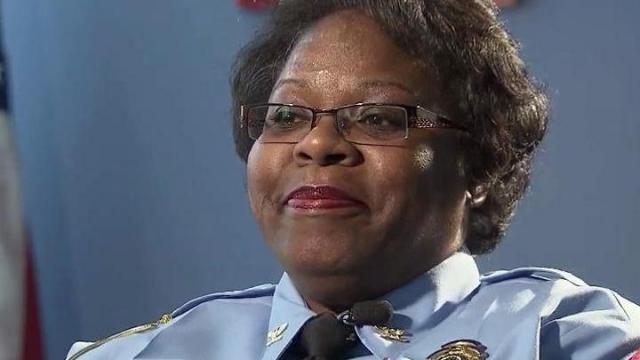 Raleigh, N.C. — Police Chief Cassandra Deck-Brown said Friday that battling an increase in juvenile crime is one of the major challenges the Raleigh Police Department faces.

Four teens were charged in December with beating a man to death with a rock and dumping his body along the Capital Area Greenway. In August, two teen brothers were charged with shooting a 16-year-old to death on his way home from Millbrook High School.

Deck-Brown, who was named police chief Thursday after heading the department on an interim basis since former Chief Harry Dolan retired in October, said she hopes to strengthen the department's relationship with local youth and family services programs to stem juvenile crime.

"How do we provide other alternatives so the way of life is other than crime?" she said. "There are thousands of kids we are involved with on a daily basis, and those kids never see the criminal justice system."

The soft-spoken 49-year-old is the first black woman to lead the Raleigh Police Department. She said she understands the role she plays and the example she must set.

Having held the interim title for four months – and having watched her brother-in-law, Mitch Brown, serve as Raleigh police chief from 1994 to 2000 – Deck-Brown said she has a realistic view of the chief's job and the challenges and opportunities it presents.

"This is a great department," she said. "One of the greatest qualities we possess is our people."

Deck-Brown knows the force of 800 sworn officers and civilians well, having risen through the ranks during her 25-year career, including stints leading its Administrative Services Division and Internal Affairs Unit.

A few days before she was named chief, the Raleigh Police Protective Association, which represents nearly 600 police officers, endorsed her for the job.

Working smart and efficiently will be crucial as the police department tries to serve a growing city, she said, adding that she plans to tweak policies and programs over time.